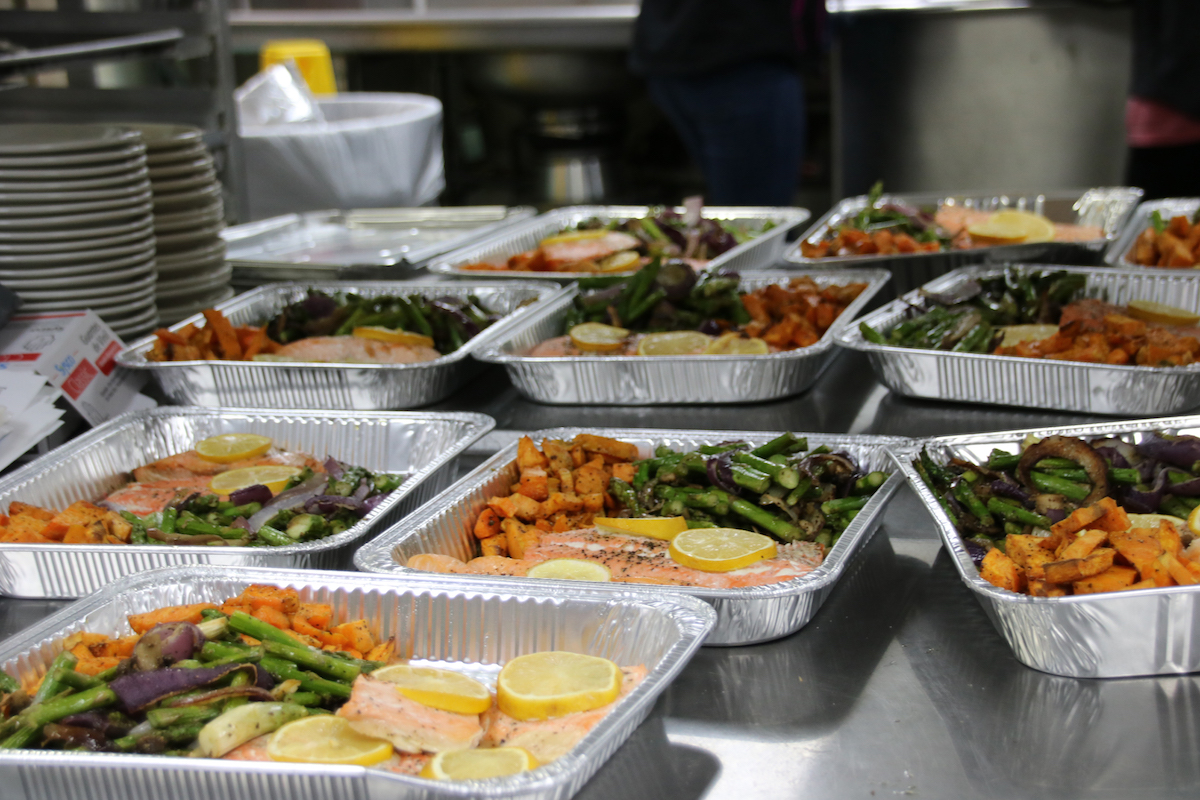 Deprecated: Methods with the same name as their class will not be constructors in a future version of PHP; phpFlickr has a deprecated constructor in /var/www/html/gradynewsource/public_html/wordpress/wp-content/plugins/flickr-justified-gallery/phpFlickr/phpFlickr.php on line 25

One and a half hours doesn’t seem like much for a college student when you’re enjoying it. It’s a commute from Athens to home while listening to your favorite music for some, or binge watching your favorite Netflix TV show for others.

But for volunteers like Elisabeth Tyler, one and a half hours is obtaining food and delivering it to five homes in Athens-Clarke County.

“I really enjoy the deliveries because I get to see and interact with them,” Tyler said. “I think growth within myself has become more confident in meeting new people and talking to them.”

Every week, volunteers like Tyler deliver groceries and a meal to clients like Kathleen Childs for The Campus Kitchen at the University of Georgia, an organization that is helping fight food insecurity on a local level.

Why It’s Newsworthy: There is an ongoing national trend of senior citizen food insecurity. Campus Kitchen at UGA is bridging the gap between older adults and the need of quality food.

The meal is cooked from scratch by UGA students in the Talmage Terrace kitchen. Fresh produce for cooking is supplied by UGArden, Trader Joe’s and other various grocery stores.

Childs is one of many seniors experiencing food insecurity and had misconceptions herself. She is a client through the Grandparents Raising Grandchildren Program, a program for non-parent caregivers that provides support, education and assistance, housed at the Athens Community Council on Aging. Childs has been a client for about a year now and couldn’t feed her three grandchildren as well without the help from Campus Kitchen.

Childs recalls the first day receiving food from them and said she was blown away. She is amazed by the service they provide, the attitudes of the students and the goods they bring to the table.

“They are not just the delivery person from the Kroger; this is a friend that I will see every week,” Childs said. The human interaction is something she said she enjoys most.

The Campus Kitchen AmeriCorps VISTA member, Suzie Henderson, says that clients are on the Grandparents Raising Grandchildren Program for a year, but Campus Kitchen will continue to provide for them once their year ends.

Not only is food being provided but a level of social interaction. More than one third of adults over the age of 45 are lonely, according to a 2018 AARP research report.

Garden Club is another program that is offered to senior citizens. This is a time when the Athens Community Council on Aging engages senior citizens in discussion and experimental learning about healthy eating and gardening.

Events like garden club are occasionally held for senior citizens, and Henderson enjoyed her time planting and gardening at the last event. “They are very respectful,” Henderson said. “Although I taught them many things, they still have a lot to teach me.”

Clients may benefit tremendously from the service of Campus Kitchen, but so does program coordinator, Brad Turner.

“Our clients are just incredibly inspiring, their attitude of gratitude is truly contagious,” Turner says. “Getting to walk alongside with them for a number of years and seeing the faith they have in Campus Kitchen; I think just speaks for a much brighter future for the university-community relationship.”

What are the Facts Behind the Issue?

Food insecurity among senior citizens is a national issue. As of 2016, 4.9 million Americans over the age of 60 are food insecure, according to a 2018 State of Hunger report by Feeding America. Georgia is in the top 10 states whose older adults are more likely to experience threats of hunger and food insecurity. Clarke County has a population of 122,037 and a 21.6% food insecurity rate in 2016, according to a 2018 Map the Gap report by Feeding America. In order to combat this issue, there needs to be a level of understanding and knowledge.

What is Food Insecurity?

Food insecurity is defined by the United States Department of Agriculture as having limited access to enough nutritious food to live a healthy lifestyle. According to Feeding America, the number of food insecure seniors has increased by 45 percent since 2001 and will keep increasing as the population grows.

Brad Turner, program coordinator of The Campus Kitchen at UGA, said some challenges that senior citizens face includes affordability, appropriateness and accessibility. All of which can intertwine or coexist.

Affordability: Can you get it? Can you buy it? Can it be given to you? Do you have the resources for it? Seniors are sometimes on a fixed income which limits their options. If a senior has medical expenses those are also being deducted from their fixed income.

Appropriateness: Is it nutritionally balanced? Is it culturally sensitive? Is is appropriate for your dietary needs? If there are certain restrictions such as being gluten-free these products may cost more, and they may not have enough funds to pay for that.

Accessibility: Can you physically get to the food or the food get to you? Being less mobile or not owning their own car would be a barrier to accessing the food or if they are reliant on someone else to get it for them. All these things are connected.

Turner said there is sometimes a lack of knowledge on how to prepare the food once it is provided to them. He says it is important to not only have equipment but skills and knowledge are essential in order to create a healthy meal.

Campus Kitchen pairs with service learning and health promotion courses at UGA which provide programming classes to the elderly. The last class was educating them about low-sugar desserts where they received healthy recipe books made by students to use at home.

Although there may be a connection between the two, this is not always true. According to a 2016 Feeding America current population report food, insecurity effects a range of different employment status. Campus Kitchen works with older adults in the working class who may have to choose between health care bills, food and utility costs.

There are life obstacles that come up at unexpectedly and expenses such as a death of a spouse, car brake down or loss of a job. Only 39% of Americans have enough savings to cover a $1,000 setback using their savings, according to a 2018 Bankrate Financial Security Index. Food insecurity could effect anyone especially if you do not have a safety net of resources if something does come up.

There is a link between the two. Turner thinks abundance in our society can lead to taking things for granted and going to waste. However, he is confident in how Campus Kitchen implements recovery through their core value of redemption. In the 2018 fiscal year, Campus Kitchen recovered and redistributed 52, 951 pounds of food that would have gone to waste otherwise.

Although this may seem true, there is a process you go through in order for eligibility and not everyone will qualify. Campus Kitchen serves clients in the Grandparents Raising Grandchildren program. Custody is one thing taken under consideration when filing for food stamp needs. If the client does not have custody of the grandchild, they cannot file as a multi-person household and will only be able to obtain for them self.

Paige Watkins is senior at the University of Georgia pursuing a bachelor’s degree in journalism, a minor in theatre, and a certificate from the New Media Institute.

Let the Games Begin and Never End at Olympiastadion

The Hiking Culture of Lumpkin County

ATHENS, GA — A self-styled “neo-masculinist” blogger who says men are superior to women ...

Teamwork on Display at the Warrior Games

As athletes head towards the midway point of the 2018 Department of Defense Warrior ...

Don’t Forget the Tip… or Do? The Great Debate

By Katya Riedlinger Some restaurants around the country are experimenting with big pay increases for ...