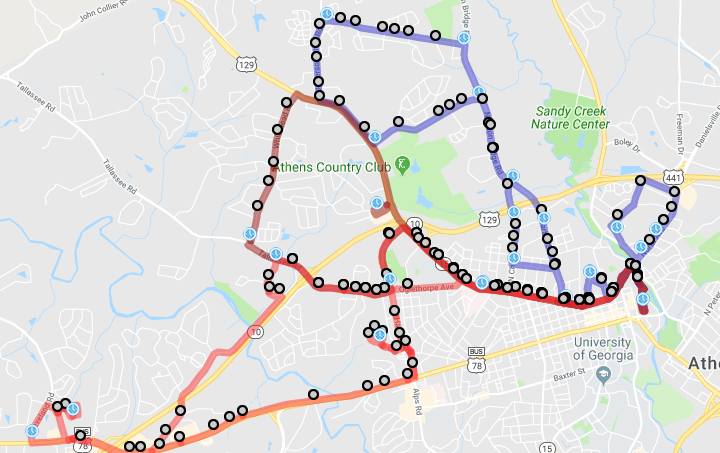 For residents who are mobility impaired, or without a car at Jessie B. Denney Tower in Athens Ga., a simple trip to the grocery store or other locales can be difficult and time-consuming. Denney Tower is an affordable housing community designated for the elderly and disabled in Athens and is owned by the Athens Housing Authority.

Why It’s Newsworthy: Transportation is vital to physical and mental well-being. Residents in Jessie B. Denney Tower are struggling to find transit to important destinations due to budget constraints.

Marilyn Appleby is the marketing and communications director for AHA. Earlier this fall, she saw the problem of accessible transportation arise at a meeting with residents; the issue kept coming up. Before the meeting, the housing authority didn’t consider it a problem because of the nearby bus stop and other assumptions.

“There are cars in the parking lot; some individuals have home health aides or family members who help them and take them to appointments or grocery shopping,” she said.

While there is a bus stop directly beside Denney, residents still have a hard time getting around.

“Sometimes, depending on where you need to go, something that would just be a few miles from Denney Tower could end up being an hour-long ride because of the route the bus needs to take,” said Appleby.

Pride also plays a part: “A lack of transportation becomes in [a resident’s] mind ‘I’m not as independent as I used to be,'” she said. She added that residents may not want to constantly rely on rides from family and friends.

Another hindrance is funding and personnel as “we have to figure out a dollar figure that we’re going to need.” AHA needs to find someone to drive the bus, and the funds to pay their wage and for gas.

“We really want to improve our residents’ lives, but we’re not solving the problem because we’re just not moving forward on it,” Appleby said.

Budgets for Athens-Clarke County begin on July 1 and are usually pieced together in April. Since the issue was recently discovered, there aren’t any funds allotted for transportation.

“Give me a pot of money,” said Appleby with a laugh.

One problem AHA has faced is not having a designated driver. A few months ago, the resident support department started a bi-monthly initiative to provide residents with a trip to the grocery store. It failed “not because of the residents, it failed because of staff. The person who was doing it got another project that they had to work on that consumed a lot of their time so they no longer could do it,” she said.

Once funding and a designated driver are solidified in the next fiscal year, Appleby hopes that AHA can do more to improve residents’ day-to-day lives. She envisions a situation where AHA can provide transportation the day after residents receive social security checks, or perhaps a retired bus driver would be interested in earning a little extra cash for a few monthly shifts.

“We need to be more creative in our thinking,” she said.

You can learn more and even plan your trip on Athens-Clarke County’s Bustracker.

Christina Conner is a senior majoring in Journalism in the Grady College of Journalism and Mass Communication at the University of Georgia.

By: Kristin Miller Dougherty Street is one of the busiest streets in downtown Athens, ...

UPDATE: Runaway Teen Has Been Found

14-year-old Riciyah Brookins has been found. She was last seen near Atlanta Hwy and ...

Your Favorite Holiday Dishes…. With a Twist

Check out the full list here. By: Brandi Patterson