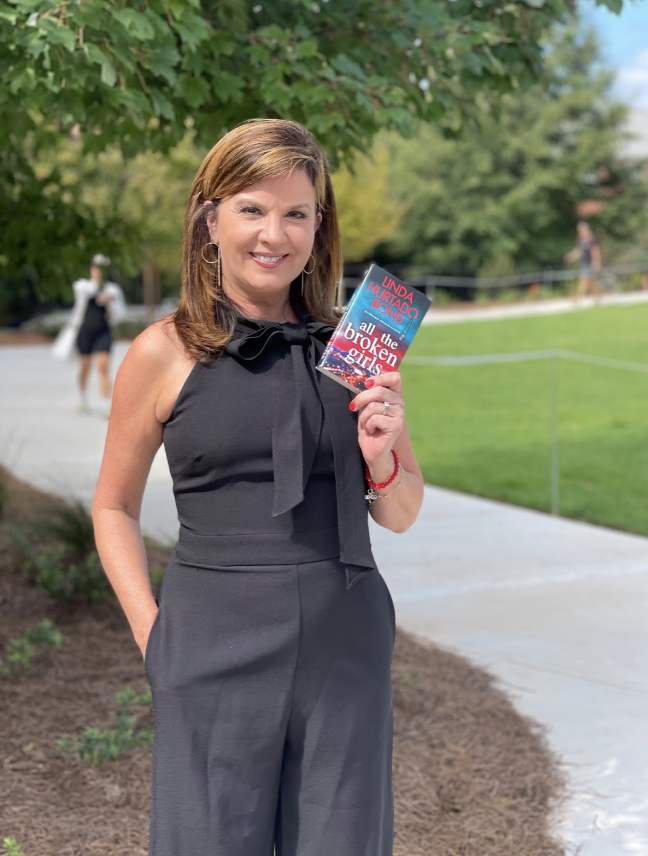 Linda Hurtado Bond adapts her skills as an award-winning news anchor of over 20 years to her work as a fiction writer. Her crime mystery “All the Broken Girls,” which was released in late August, allows the Tampa, Florida-based journalist to combine these writing styles and background knowledge from the TV news world to create the story of Mari Álvarez, a reporter and crime-solver. The thrilling novel is her fourth book.

How have your personal experiences in journalism influenced the narratives and characters that you write about?

I chose to write books about reporters because you always hear “write what you know.” And I just felt like it would be authentic. I can bring a realism to the story by just writing where I’ve lived for decades. And I didn’t have to use much research because I spend every day in a newsroom. I find in the reviews that I do get from people, they like the authenticity, like they really feel like they’re sitting in a newsroom and understanding how the process works. Even right down to the competitive edge between journalists, the ever-changing dynamics between a reporter and her boss or news director. So I go through all of that. It’s not just going out to solve a mystery. But basically, these reporters that star in my books, they go out on assignment and stumble on a different mystery and then have to solve that mystery, usually with the sidekick (like videographer Orlando). All of that has influenced my writing a great deal. I kind of wanted to bring that into my fiction world, and almost like pull back the shades and allow people to see what it’s like to be a television news journalist.

There’s obviously a difference between writing a two-minute story and a 400-page book. And so before I wrote any of my books, I had to go back and learn how to write. If you’re going to write fiction, you have to study the craft of writing fiction. If you’re gonna write television news, you have to study that craft too. But the thing that I have in common, I would say, is that I just know how to write pretty lean and quick, because I’m used to writing under a deadline. When I changed the back half of that book, I changed the back half in five days. I literally just sat there for five days. But for me, getting in the head of the characters and never leaving, allows me to write quicker. From decades of being a journalist, I can write anywhere, I can write in a hurricane, I can meet any deadline because I’m just used to that, that’s the job.

Book Reviews of 'All the Broken Girls'
Read three takes on Linda Hurtado Bond’s novel from journalism students in the Critical Writing class.

Where did you originally want to go with versus what your editor said?

When I had to add the 25,000 words, I was ranting with my co-anchor during commercials one day. He’s a writer, too, and he said, “Well, I’ll read the book and I’ll tell you what I think is missing. After all this killing, there needs to be a funeral, like the funerals where everybody will come back together for a legitimate reason. You can wrap up some of the loose ends in the story authentically at a funeral.” And so he suggested that and I wrote the funeral in. That also gave me a chance to put in the letter that Mari reads from her grandmother. It was actually a letter my mom wrote to me when she had breast cancer and she knew she was going to pass away. And so it was kind of a way to sneak in a very personal shout-out to my mother and my co-workers now. They were tweaked a little bit because I had to make it work for the story, but that’s the basic thing there. I thought it was kind of neat because we all like to know how the person that we love the most in the world felt about us. It was nice having that letter and adding the funeral scene kind of gave me a chance to put that in there. Sometimes changing the ending is a good thing because it opens the door to something new that wasn’t there originally.

Comments have been edited for length and clarity.

Katie Beth Williams is a senior majoring in journalism.

Linda Hurtado Bond poses with her new novel "All the Broken Girls," published in August 2022, outside of Grady College of Journalism and Mass Communication. (Photo/Dania Kalaji)

Linda Hurtado Bond poses with her new novel "All the Broken Girls," published in August 2022, outside of Grady College of Journalism and Mass Communication. (Photo/Dania Kalaji)
NEXT STORY

Linda Hurtado Bond poses with her new novel "All the Broken Girls," published in August 2022, outside of Grady College of Journalism and Mass Communication. (Photo/Dania Kalaji)

Linda Hurtado Bond poses with her new novel "All the Broken Girls," published in August 2022, outside of Grady College of Journalism and Mass Communication. (Photo/Dania Kalaji)
PREV STORY

Music To My Ears (Finally): How Athens Venues, Businesses Adapt To ‘New Normal’

Four to five nights a week, a line of people wrap around the ...

One of the most difficult parts of leaving my hometown of Pensacola, Florida, for ...

Athens, Georgia, is a city typically bustling with students and locals. The Classic City’s ...