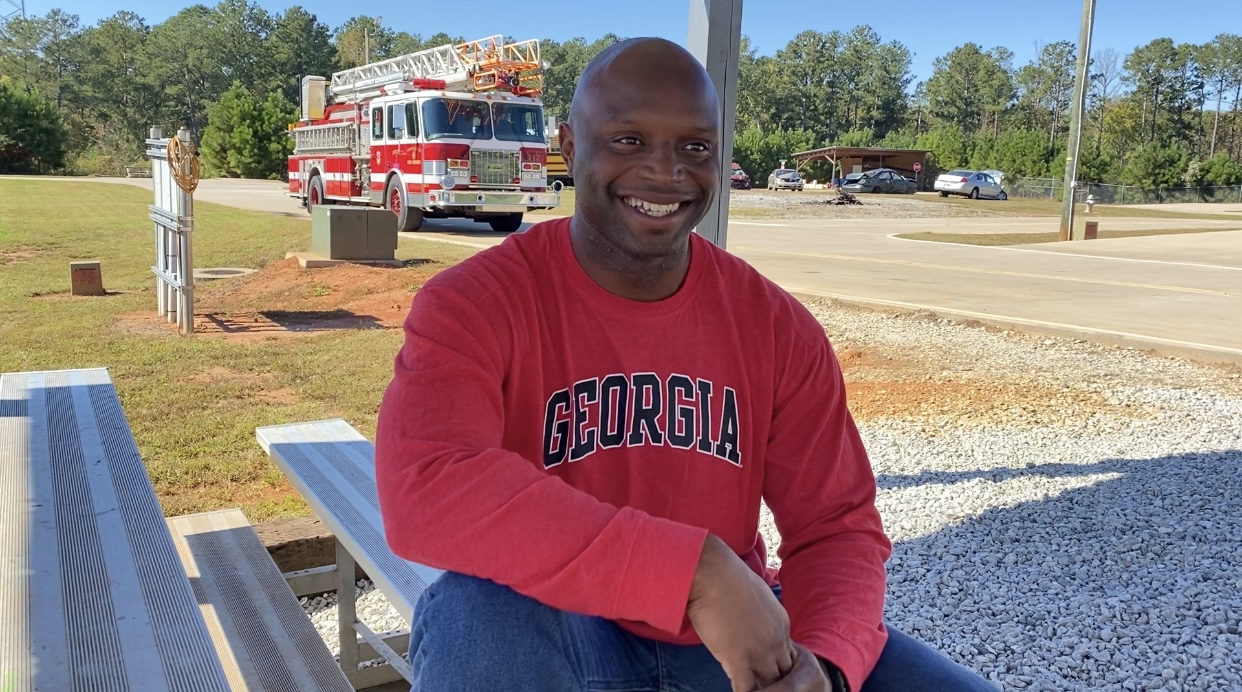 Kregg Lumpkin has gone from catching footballs in college and in the NFL to catching hoses and oxygen tanks. Lumpkin now spends less time in stadiums and more time at Newton County’s firefighter training facility, where he’s recently earned the title of fire training chief.

Lumpkin graduated from the University of Georgia in 2007 where he played running back for the Bulldogs. After graduation, Lumpkin, as an undrafted free agent, played on four different NFL teams. He played his last professional season in 2013 with the New York Giants.

After deciding to retire from football in 2013, Lumpkin worked various jobs with his real estate degree. After trying to be a leasing consultant and a paraprofessional Lumpkin said he realized, “it just wasn’t my niche.”

In 2016, he successfully passed Clayton County’s firefighter program, where he became trained and certified.

Why It’s Newsworthy: In light of COVID-19, first responders are needed now more than ever. UGA alumni and former UGA running back Kregg Lumpkin has taken on the job of training chief for Newton County Fire Department.

Grady Newsource: What made you decide to join the fire department and be a first responder

Lumpkin: “As a first responder, it is more of going out to respond to that call and to make sure that person is well. Or even asking yourself, how can I assist that person? That’s why I joined, because I am a giving person, I love to assist and help in any kind of way I can.”

Newsource: What made you want to train others for this job?

Lumpkin: “When I first came into Clayton County’s hiring process, I had great trainers. I kind of model everything that I’ve done thus far from them, and just try to continuously build on it to make sure they’re getting the proper training that they need throughout recruit school, whether that is fire or EMS. That way once they are on the line, they can have that great training to where they can say, ‘I’ve been in a situation like this before and I’ve been through worse, but now this is a lot easier then what I’ve been doing in the controlled environment.’”

Newsource: When training others, how do you intend to inspire others in this field?

Newsource: What’s the hardest and most challenging part of the job?

Lumpkin: “In my job title right now, the chief of training, it’s just making sure that everybody is well trained whether that is fire or EMS. It’s making sure their certifications are up to date and just being able to plan and maneuver that … Also, it’s that me as a training chief, is getting the correct training, our training captains are getting the correct training, making sure everybody is staying on top of training, because everyday is a different, may be the same call but it’s different symptoms or a different sign that is presented differently throughout each call.”

Newsource: What’s your favorite and or the best part of the job?

Lumpkin: “Being able to train, being able to put on your gear whether that’s for a regular EMS call, or putting on fire gear and going into a burning building, which ours is controlled. But just being able to go in and train and show that I myself as a chief of training can still do the same job that I am trying to teach the recruits to do, as well as online personnel…”

Newsource: What’s the most memorable part of this job?

Lumpkin: “My most memorable moment was my first time in Clayton County putting gear on and responding to a fire call. I was riding in the back, the driver and lieutenant were up front, and on the way to the call my lieutenant was questioning me, ‘what do you think about this call, what possibly could be going on at this moment,’ and I was just giving out possible answers. When you arrive on scene, it could be completely different. When you get onto a call, your officer is commanding a scene, ‘hey you and the driver go here, y’all go in and do a search’ or ‘ take a nozzle upstairs and search for an extension.’ So, just the first time I got the chance at responding to a fire call and not knowing what was going on at that time. With the training that we had through recruit school and the training we do online, it prepared me for a lot.”

Newsource: What is so valuable about the job?

Lumpkin: “We are human but we are trying to respond to things that people are running away from. So, if you’re going into a fire or going into an EMS call and you don’t know whose house it is, but they’re accepting you to come in, you have to treat them with respect. You have to treat that house with respect. Also, you have to maintain safety. I try to hone in on safety, saving lives, and protecting property when training recruits.”

Alyssa McDaniel is a student majoring in journalism in the Grady College of Journalism and Mass Communication at the University of Georgia.

UGA alumni and former NFL player Kregg Lumpkin tells how he became the Chief of Training for Newton County Fire Department.
NEXT STORY

ATHENS, GA- The University of Georgia has been desegregated for 51 years now, but ...

1. Election results: The Election was last night and we have the results in!   2. Oconee ...