Transgender students at the University of Georgia are faced with daily struggles unlike those of the rest of the student body. Where is the nearest restroom they’re comfortable using? Will they be able to afford this month’s round of hormone injections? Is it worth it to notify all of their professors that they go by a different name?

These are the hoops that Rylan Shaughnessy has jumped through since starting school at UGA in the fall of 2016. However, it’s the school’s inclusivity and forward-thinking that led to his decision to not only become a Bulldog, but begin his official female to male transition.

Why It’s Newsworthy: UGA provides transgender students with specific supports and resources to allow them to feel included on campus and move forward with their transitions.

Rylan figured he’d start his college career at the University of Alabama, just like his dad, uncle and two of his brothers, in the fall of 2016. But that changed when Rylan, now a 20-year-old, junior social work major at UGA, saw the multitude of resources and support offered to LGBT students at UGA. This school was his gateway to starting his transitional journey, one that would allow him to live his authentic self.

Within the first two weeks of his freshman semester, Rylan, a transgender male, began hormone therapy at the campus health center.

Every Friday since Aug. 26, 2016, he has injected himself with 100 milliliters of testosterone intramuscularly, and he will do so every week for the rest of his life. The monthly cost of his injections totals nearly $1,500, which he’ll pay each month for his lifetime. That’s roughly $18,000 a year to keep being Rylan. He also underwent a discounted $7,000 chest reconstructive surgery, otherwise known as “top surgery,” in December of 2016.

Along with multiple LGBT clubs and the LGBT Resource Center in Memorial Hall, UGA also allows students to change the names printed on their diplomas after a legal change is complete, whether it’s their first or last name. Rylan has not yet legally changed his name from his birth name, Kelly. Although his father wants him to wait until after college, Rylan has a different dream.

I really want to do it before I graduate college because I want my diploma to say ‘Rylan,’” he said.

UGA has a listed 158 unisex restrooms on its main campus in Athens, including locations in Ramsey Center, Tate Student Center and the main library. This multitude of resources allows transgender students, faculty and staff to use a non-conforming and comfortable restroom setting.

Georgia.gov explains that a name change in the state of Georgia requires a petition submitted to the local Superior Court and list of reasons why the petitioner would like to change their name, which is contingent upon a judge’s approval.

A gender change is more complicated and expensive, something that Rylan will not accomplish anytime soon. The Georgia Department of Driver Services says that “a person may have the gender designation on their driver’s license changed after a gender reassignment operation upon the presentation to a driver examiner of either a court order reflecting such change, or a physician’s letter certifying such change.”

“The fact that insurance doesn’t cover any of this is holding back so many trans people from transitioning,” Rylan said. “I can change my name but won’t anytime soon change my gender on my license, which really sucks cause it still says female everywhere.”

Rylan is one of the estimated 1.6 million people who identify as transgender in the United States, and one of 55,650 in Georgia, according to a June 2016 study done by the Williams Institute. However, Rylan thinks there’s a larger transgender community than studies show.

“I think that number is bigger,” he said. “I think, because there are so many closeted people in the world because they’re afraid to come out.”

In a recent memo leaked from the Department of Health and Human Services to the New York Times, notes a more narrow redefining of gender under federal law, which would ultimately reverse significant legal recognition of the transgender community in America.

Caitlin Oakely, a spokesperson for the Department of Health and Human Services, responded to a request for comment.

“We do not comment on alleged, leaked documents that purport to indicate the status of deliberations or the focus of the department. The Obama administration’s broad definition of ‘sex’ was enjoined by a federal court on a nationwide basis in December 2016 and the Obama administration did not appeal. That court found that the Obama administration regulation was overbroad and inconsistent with the text of the 1972 Title IX law prohibiting discrimination on the basis of sex. The court order remains in full force and effect today and HHS is bound by it as we continue to review the issue. Everyone deserves to be treated with respect and HHS’s Office for Civil Rights will continue to vigorously enforce all laws as written and passed by Congress, prohibiting discrimination in healthcare on the basis of race, color, religion, national origin, sex, age, and disability.”

Although Rylan believes nothing significant will come from these speculated efforts by the department, he is most frustrated with the confusion surrounding the difference between ‘sex’ and ‘gender.’

Rylan also stressed the importance of preferred pronouns when speaking with and referring to transgender people.

“Trans people appreciate it if you ask them what their pronouns are,” he said. “It’s a lot better to ask rather than to just misuse pronouns, cause it hurts when you misuse pronouns. It’s like you’re invalidating my gender identity.”

As he works toward his degree in social work, he hopes to officially change his name and graduate as Rylan. Along with that, his social security card, birth certificate and every other document in his name will finally reflect the real Rylan.

Rachel Kelso is a senior majoring in journalism in the Grady College of Journalism and Mass Communication at the University of Georgia.

Athens, Ga. — One alternative to the budget problem may be casino gambling. One ...

A profile on Becky Huss, a Maysville Elementary School gifted teacher who has unique ... 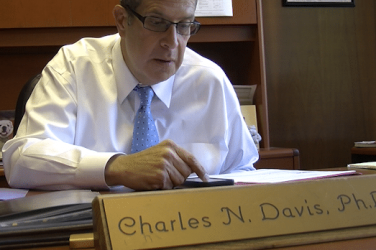