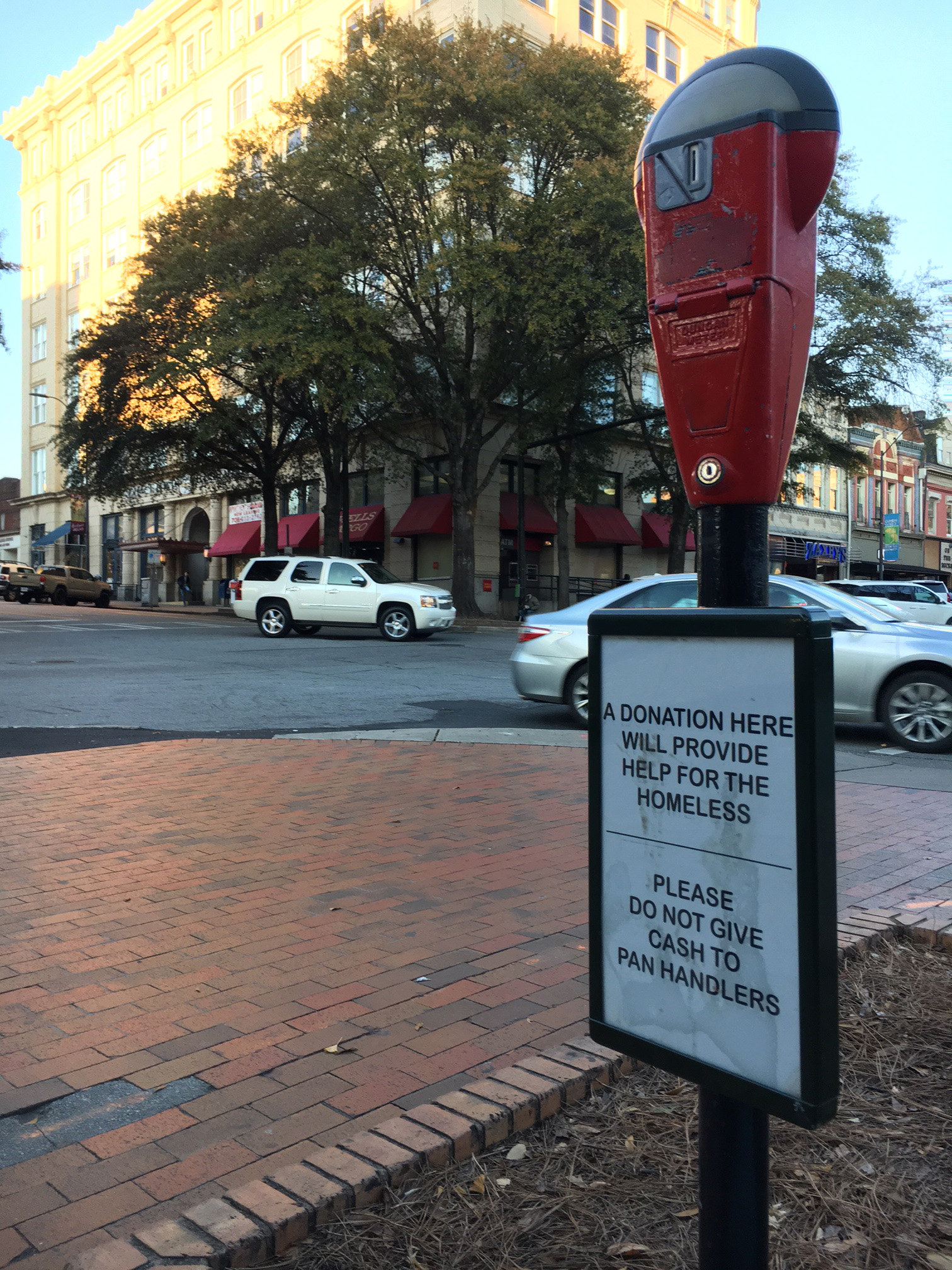 On any given day, downtown Athens is home to multiple people with signs that read, “Homeless, please help.” It is also home to four parking meters that read, “Donations here will provide help for the homeless. Please do not give cash to panhandlers.”

Why It’s Newsworthy: Donating money to the homeless in the parking meters downtown can provide an alternative to giving to panhandlers, but this alternative, just like giving money directly to people, has both risks and rewards.

“Panhandling and homelessness are often conflated because people see someone holding a sign downtown and sometimes these signs say, ‘I’m homeless.’ I can tell you that we as a community and many communities will survey people, and often these individuals who are holding these signs or panhandling are not actually, literally homeless. Many of them have their own place,” said Haylee Bannerjee, Athens Homeless Coalition treasurer.

Bannerjee said Athens, with UGA football games on weekends, can be particularly lucrative for people trying to make a few hundred dollars for standing outside a couple hours. She did note, though, that a large portion of the people who panhandle actually need the money as income.

“Sometimes people may be receiving disability benefits. What that means is that someone might be getting a check for $730 a month, and they are expected to live on that as their entire monthly income. Often those people might turn to panhandling because there are all kinds of restrictions when you are receiving disability benefits. There are restrictions that you cannot work over a certain number of hours and often the work that you find is lower-wage work,” Bannerjee said.

On top of those who need money from panhandling to supplement income, a homeless community does exist downtown, and they rely on the money they receive daily.

“There are many people downtown who are literally homeless who sleep downtown or are accessing shelter services sometimes, but there is a difference. Not everybody who is panhandling is homeless,” Bannerjee said.

Without being able to tell the difference between those who actually need money and those who do not, some find it difficult to open their wallets and help others on the streets.

Bannerjee acknowledged that while giving to panhandlers has pros and cons, a common argument she hears against it involves concern over how the money is used. People get nervous their money will be misused and spent on alcohol or illegal substances.

There are different arguments for and against panhandling. People who are against it will say, ‘Well, that money would be better used if you donated it to an agency that’s doing this work,’” Bannerjee said.

Bannerjee said misinformation and fear of altercations with strangers also play into people not wanting to engage panhandlers.

These lines of thinking are what produced the idea to situate parking meters in downtown Athens as a collection area for donations to homelessness initiatives.

“So our hope from the coalition’s standpoint was that you can see those meters and you don’t have to be afraid to make a choice to actually engage with someone. Our organization can be in that position to make the choice of how to help in a response to homelessness as a community,” Bannerjee said.

Since 2003, Athens Homeless Coalition has been in a partnership with the Athens Downtown Development Authority in which proceeds from those old meters go to the coalition for use.

“The coalition exists to represent the community’s response to homelessness. And that means the coalition should be the group of experts on homelessness and what the needs are in the community. We would hope that with a donation to those meters, we might see a more strategic response and maybe a longer-term response with the money we collect, rather than just helping one person at a time with a small donation,” Bannerjee said.

While the meters offer many perceived advantages, there are setbacks to overcome. One is the amount of money brought in by the meters.

Another setback is the verbiage on the signs. Bannerjee said the meters with their current signage were put into place before her time as treasurer, and that the current coalition board feels they need a change regarding the directive to not give to panhandlers.

“We were, as a group, uncomfortable giving that directive. And so instead, that’s why we plan to change that verbiage to ‘looking for a way to help,’ rather than telling people don’t do something because we kind of believe that, again, in a situation where someone is receiving disability benefits and they are doing this to supplement income that is really low, we felt uncomfortable as an organization telling people not to be generous with that person,” Bannerjee said.

Another tweak to the system involves where the money is allocated. According to the Red & Black, the money has been used to provide bus passes for the homeless, but the Athens Homeless Coalition is set to announce a new initiative for the money in January.

Aside from all of this, Bannerjee noted that by putting money into the meters instead of a person’s hand, you might miss out on something special.

I and the coalition are not telling people not to give money to an actual human being. I think it can be a really meaningful and powerful experience to take the time to engage with a human being that you see on the street,” Bannerjee said.

To Bannerjee and the Coalition, the important part is that people want to give.

Despite the different pros and cons to giving to panhandlers or meters, Bannerjee noted it boils down to personal choice.

“People are free to donate how they choose,” she said.

Daniela Rico is a senior majoring in journalism in the Grady College of ...

Early Voting begins October 16 for the Georgia Special Elections for Districts 117 and ...