You live on the East Side of Athens, Georgia. You don’t own a car, you can’t afford ride sharing services and few of your neighbors have cars. To get to work, school or doctors appointments, you rely on Athens Transit.

Because the bus is your only way around, you don’t leave the East Side very often. Although the bus system covers Athens-Clarke County, several stops are only serviced once an hour, and switching routes can be time-consuming. A friend gave you a bike to use, but it needs repairs you can’t afford. Even if it did work, you’re nervous about a lack of sidewalks and bike paths.

Scott Long of BikeAthens is no stranger to situations like yours. As the nonprofit’s executive director, he sees people with similar concerns every day. In response, BikeAthens is working to build equity and encourage safety in transportation.

Why It’s Newsworthy: In May 2022, voters in Athens-Clarke County will decide whether to approve a transportation special local option sales tax that funds many transportation infrastructure projects. This story provides context on how and why funds from that tax may be utilized to expand transportation networks and improve safety for bikers and pedestrians.

Established as a nonprofit in 1992, BikeAthens runs a bike donation and redistribution program. educates cyclists on safe riding and hosts weekly “Fix Your Own Bike” (FYOB) events for people who can’t afford or don’t know how to repair their bikes. 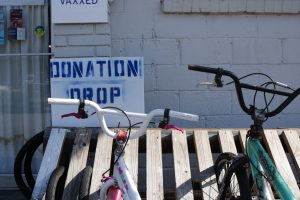 BikeAthens accepts donated bikes to be refurbished and redistributed in the Athens community. (Photo/Caroline Odom) 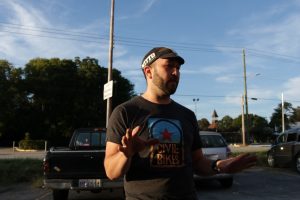 Scott Long, executive director of BikeAthens, chats with visitors outside of the shop. BikeAthens is a nonprofit that advocates for transportation equity, but it also serves as a community for bike enthusiasts. (Photo/Caroline Odom) 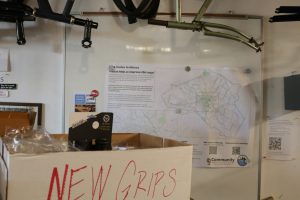 A map of Athens bike routes is on display in the BikeAthens shop. In 2018, BikeAthens advocated for the Athens in Motion work plan for active transportation and continues to support the project. (Photo/Caroline Odom) 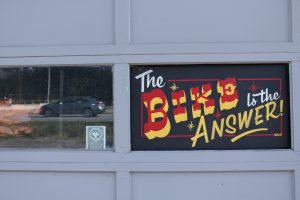 One of the garage doors at the BikeAthens workshop informs visitors and passersby that “The bike is the answer!” In the window’s reflection cars drove down Broad Street, a bustling corridor with no bike lanes. (Photo/Caroline Odom) 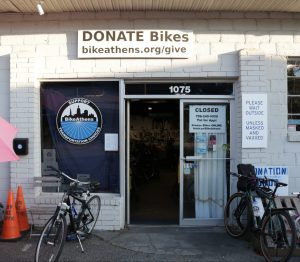 The entrance to BikeAthens remains open on Fix Your Own Bike night. All are welcome to FYOB, but visitors are asked to remain masked when inside. (Photo/Caroline Odom) 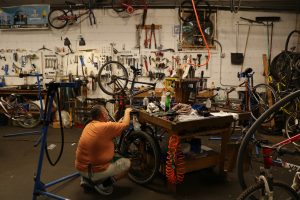 Fix Your Own Bike night visitor Wa Lo examines tools as he works on his bike. This was Lo’s first time returning to BikeAthens since the COVID-19 pandemic. (Photo/Caroline Odom) 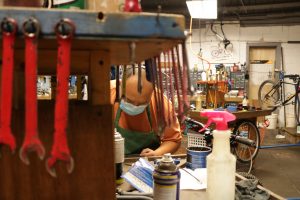 Fix Your Own Bike night visitor Wa Lo examines tools as he works on his bike. Lo returned to BikeAthens for the first time since the COVID-19 pandemic. (Photo/Caroline Odom) 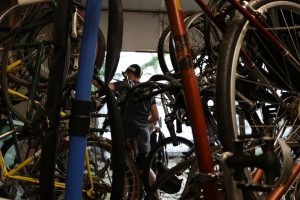 Scott Long, executive director of BikeAthens, helps a visitor find a part at BikeAthens’ Fix Your Own Bike event on Sept. 9. FYOB is open to all community members who need assistance or tools to work on their bike. (Photo/Caroline Odom) 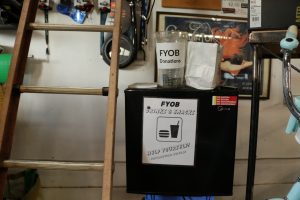 The donation box and refreshment fridge keep each other company at BikeAthens’ Fix Your Own Bike event. BikeAthens asks visitors to make a $10 donation for attending, but nobody is turned away. (Photo/Caroline Odom) 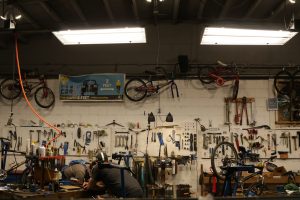 Scott Long, executive director of BikeAthens, assists a visitor with BikeRepairs at a Fix Your Own Bike event on Sept. 9. (Photo/Caroline Odom)

The ability to get from place to place can impact the relationships and resources a person can acquire, according to a 2018 transportation report from MDC, a community development organization formerly called Manpower Development Corp.

In advocating for equity, BikeAthens considers that “affordable, accessible transportation is a critical component of social and economic mobility,” BikeAthens’ website says. A national survey from Portland State University found that 51% of people in the U.S. are interested in biking more but have concerns about safety. Traffic fatality data may give reason for their concerns.

Pedestrians and bicyclists represent less than a percent of individuals involved in Georgia’s motor vehicle crashes, but they are involved with 17% of traffic fatalities, according to a 2019 report from the Georgia Governor’s Office of Highway Safety. Between 2015 and 2019, 15 of those fatalities occurred in Clarke County, a 2019 county fact sheet said.

“Basically, we were just the loud, angry people that everyone else wanted to shut up,” Long, BikeAthens’ executive director said at a Sept. 9 FYOB event.

As a result of being loud and angry, the Athens-Clarke County government has dedicated funds to expanding transportation infrastructure through a transportation special local option sales tax, better known as TSPLOST. 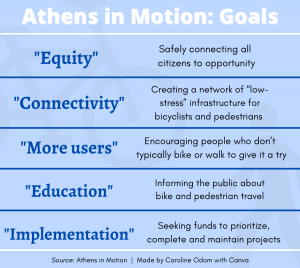 As the 2018 round of TSPLOST approaches its $109.5 million cap, the TSPLOST advisory committee, of which Long is a member, is considering projects for TSPLOST 2023. The committee is accepting public comments on the projects and will start reviewing comments on Oct. 15. After the committee chooses from 91 proposed projects, Athens-Clarke citizens will have a chance to vote on TSPLOST 2023 on May 24, 2022, Long said.

The League of American Bicyclists considers Athens one of the 12 bicycle friendly communities in Georgia, but that may depend on where you live in Athens.

Irene Ivie, a second-year master’s student at the University of Georgia and vice president of the BikeAthens board, is a commuter cyclist. She rides her bike because it’s budget friendly, and she enjoys seeing more of Athens.

But at an FYOB night, Ivie acknowledged that she has the choice to ride her bike every day while her car sits in her driveway at home. Not all Athens residents have that choice.

“If you don’t have a car, you have to have a bike in Athens,” Ivie said. “Public transport isn’t robust enough here to get you to work on time. Most Athens transit buses only come once an hour. So if you miss one, you know, that’s kind of toast.”

Residents who do have bikes may be forced to ride on poor or unsafe infrastructure, Ivie said. Although Milledge Avenue is flat, a lack of bike lanes and abundance of fast cars creates hazards. Baxter Street has bike lanes that meet the minimum required width, but storm drains occasionally impede the lanes.

“Greater amounts of interconnectivity and …  more thoughtful placement of bike infrastructure would be nice,” Ivie said.

“If you’re guiding neighborhoods and communities to Atlanta Highway or West Broad, and then you’re met with just grass medians with no sidewalks and no accessibility, what can you do now?” Sizemore said. “Focus on laying those main foundations … to make it as safe and accessible for as many people as you can, and then tie … communities in.”

A Breadth of People

AIM prioritizes its 117 potential projects with a weighting system that considers demand, accessibility, user comfort-level and public input. But public input can be hard to come by, Sizemore said.

“You can’t force people to respond to surveys. You can only reach the audience that wants to be engaged,” Sizemore said. “There’s a lot of disenfranchised communities who are tired of government or don’t trust government, and they don’t necessarily want to be involved in commissions or groups.”

That’s where BikeAthens comes in.

When BikeAthens interacts with this diverse community through bike donations, FYOB events or collaborating with other Athens nonprofit organizations, BikeAthens learns about their concerns and desires.

Through these relationships, BikeAthens and Long can carry concerns to the AIM commission.

“The quickest way that you can lift somebody out of poverty is to give them access to transportation,” Long said. “I see it every day,” Long said.

Even with funding from TSPLOST 2018, limited resources like time and staff impact how quickly projects can be accomplished, Sizemore said. With that funding, the question is, “How many projects can we do in five years?”

In 2023, Athens-Clarke County will revisit AIM and revise the document to reflect progress, updates and shifts in priority, Sizemore said.

“It’s nice to be invited to sit at the table,” Long said. “That wasn’t always the case for BikeAthens and bike advocacy in general.”

Caroline Odom is a senior majoring in journalism and risk management and insurance with a certificate in personal and organizational leadership. 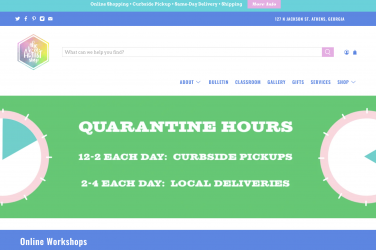 While shops, restaurants and galleries are empty all across downtown Athens, a small art ...

By Kaleigh Galvin   The Indian Cultural Exchange at UGA celebrated this major Hindu ... 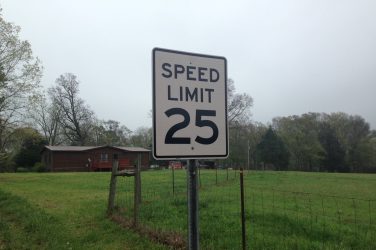 DANIELSVILLE — There is a newly posted speed limit on Forest Trail in Madison ...