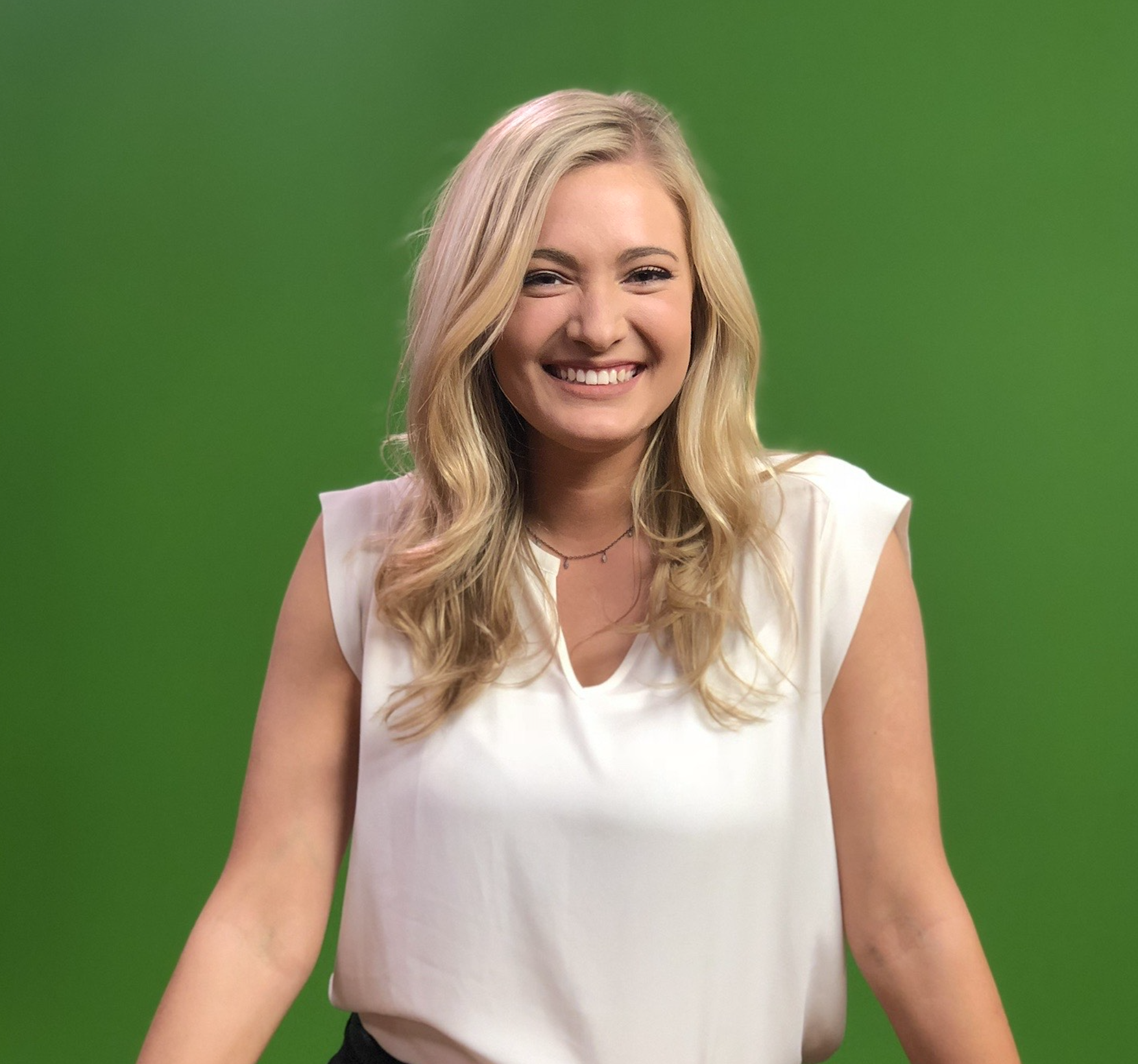 —To further our mission to talk about process and quality in journalism, each guest curator has highlighted what he or she sees as the “don’t want to miss” pieces posted to Grady Newsource that month, along with some constructive reflection about the journalism.

Casey Rose (ABJ ‘19) is a producer on “Wake Up” at WHAS11 News in Louisville, Kentucky. She currently line produces the 4:30 a.m. show, while writing content for later in the morning and working with reporters to produce future stories. Rose helped launch the new morning show in June 2019 with a talented group, both on-air and behind the scenes. 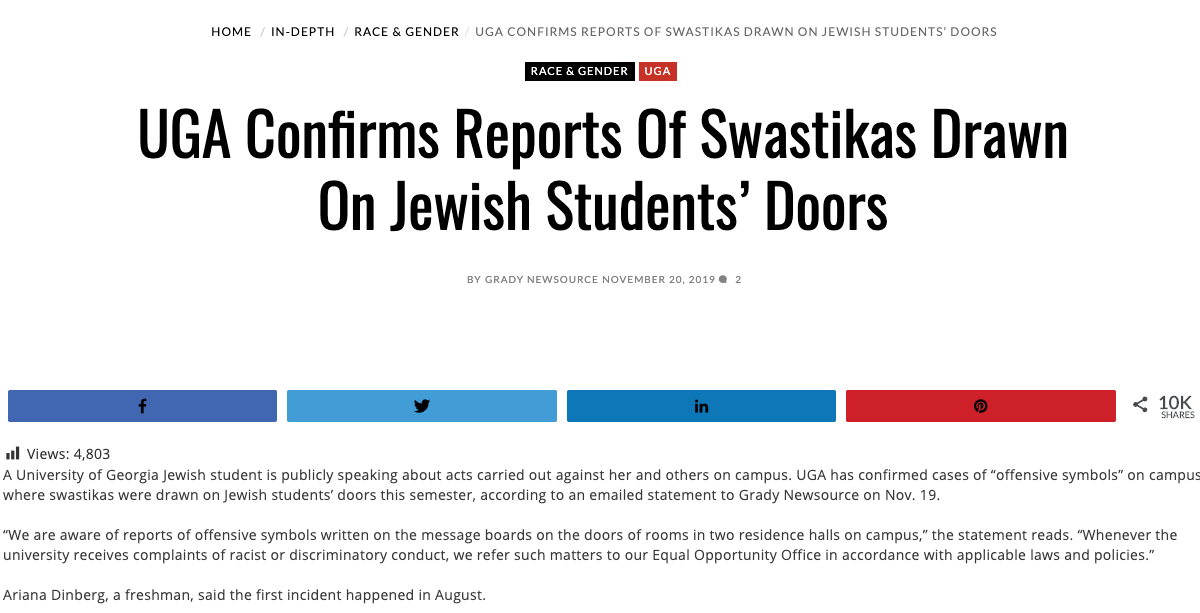 This story has a lot of great elements, particularly the in-depth context and clear process journalism. I’ve dealt with UGA Communications and know how difficult this probably was to get confirmed. That said, I would’ve included something about how multiple students experienced acts of anti-Semitism in the lead. Great job asking the first student for pictures. The torn Greek letters are really powerful. I like how you’ve used subheadings to organize responses, but I’m not sure the response from the Young Democrats was necessary. I get the tie-in with the interview, but I’m sure many organizations put out statements as well. Introducing Harris as another Jewish student on campus was enough to tie him to this story. The flow from his introduction on rocks. The national, timely context you gave really added to the story as well. I had no idea this was an issue on college campuses. The looking ahead at the end of the article was wonderful as well. The only thing I would’ve added is a link to where you can report similar experiences to the Equal Opportunity Office.

You did include contact information in a Facebook post. Comparing hate crimes and hate incidents was a great way to tease this story on social. It made me want to learn more and pushes back to the primary platform. My biggest note for the article and the story—and on nearly everything I saw on the website—cut the cop talk! You wouldn’t say things like “sustain any damage” in a conversation with anyone. It can be intimidating, but you’re there to explain things to your audience in a way that makes sense to them. 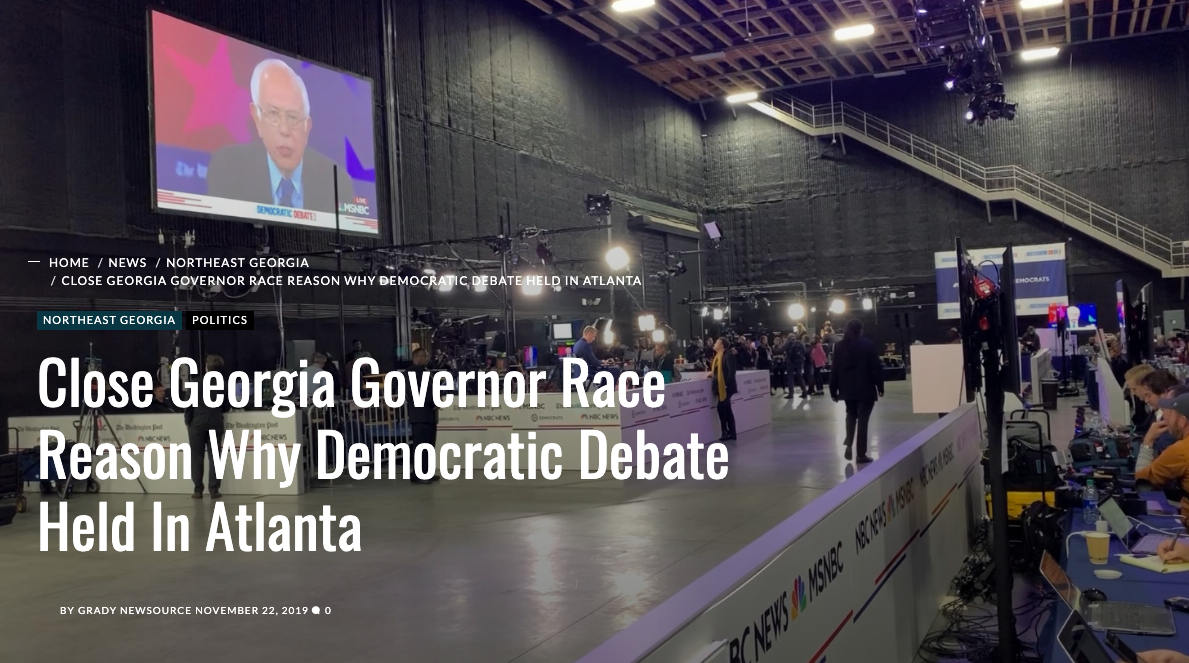 This piece first jumped out at me on Instagram, then later on Facebook, because of the strong pictures. They’re active and vivid. Most importantly, the pictures make me want to read the deeper story, which is exactly what social posts are supposed to do—drive back to the main platform. The caption worked for Facebook, but Instagram left me lacking. Both captions are exactly the same. Try playing off the strengths of each platform instead. For Instagram, it’s all about visuals, so the caption can be short, sweet and, most importantly, conversational.

My biggest critique of the web article is the headline. It doesn’t make sense to me on its own, and especially doesn’t given what the article talks about. I would’ve used the setting background and the DNC interview in a separate breakout story, then linked to it in the article about the debate itself. Help keep that bounce rate down! My favorite thing in the article was the option to listen to the woman singing directly after you told me about it. Great move. I get where you’re coming from with the timeline, but I think some of the events could’ve been used as subheadings as a way to organize a story with a lot of parts.

The issues covered in the meat of the article are written well.  While I don’t think the public has an interest in events in and around the media center before the debate, I would’ve liked more insight into what was talked about there after. I know you were there because of the lovely pictures, but nothing in the actual copy tells me you learned anything after the candidates got off stage. Finally, I would’ve ended with the looking ahead piece: the December debate. Student reaction is great and there’s a place for that, but including it in this article means you had to wait to publish until at least well into the next day in order to gather it. You want to push something out as soon as you can, provided you’ve triple-checked the information. 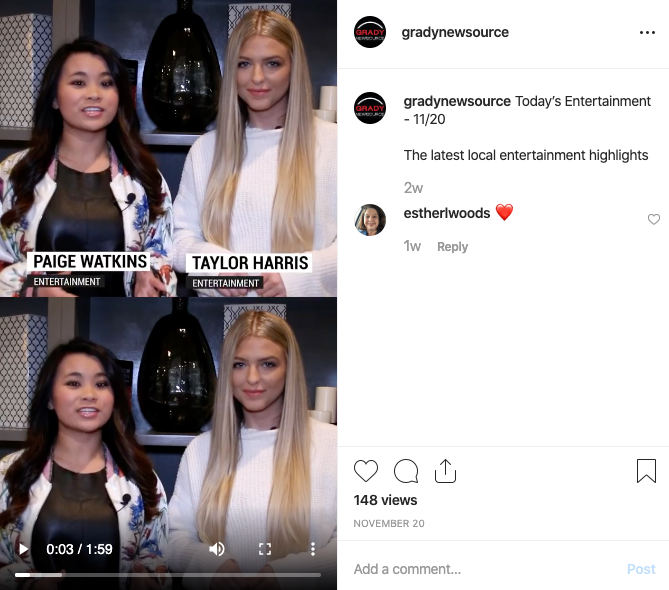 It’s about time Newsource had people covering entertainment news! These are some of the stories the audience cares most about, so give the people what they want. One of my biggest notes is to make sure the look is consistent with the rest of Newsource’s brand. I know it’s a specific segment, but it still needs to feel like the same outlet. It’s the same with being on camera. This platform should be treated the same way as any other standup. It needs to add to the story, whether that’s demonstrating something or acting as a bridge. That means the viewer shouldn’t see you most of the time. Take some of those graphics and pictures full screen, and use video when you can.

When you are on camera, make sure you remember to be a person. You can give your opinion about things in a way that doesn’t shape the audience’s view. What mac and cheese mixture would you love to try? What do you think makes the Classic City stand out from other cities? You spend time watching people on social media because you enjoy their personalities, not just because of what they’re saying. Interacting with social posts should be treated the same way. Instead of reading exactly what was posted, try paraphrasing. You reading a post to the viewer doesn’t add anything. I would also try to keep this segment as local as you possibly can. There are plenty of things going on around Athens, Northeast Georgia and even statewide that you can talk about. Chances are your audience already scrolled past the big national entertainment story of the day. 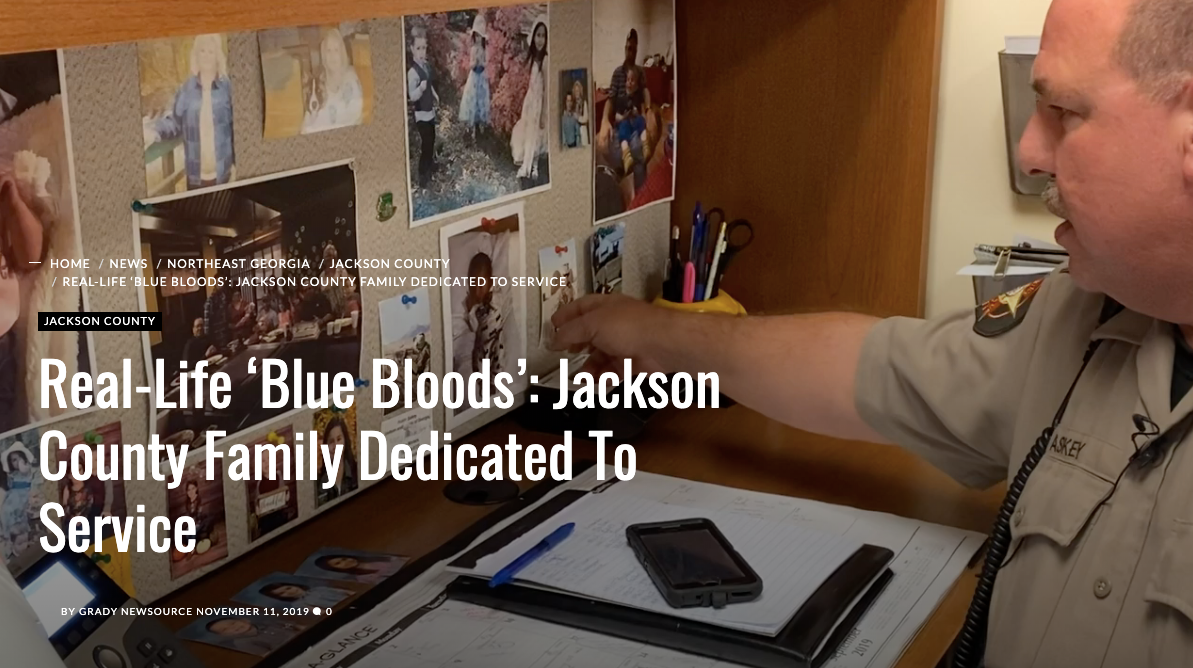 I’m a sucker for a good profile. You were given such a visual story and ran with it. The storytelling is smooth and engaging. You wrote into quotes well and let the pictures do the heavy lifting. My only note is I wish it had been more promoted on social media. With all the elements, you could’ve served each platform differently. Each memento you focused on could’ve been featured in an Instagram carousel, a 360-picture could’ve done great on Facebook, and you could’ve really tapped into the “Blue Bloods” show angle with some pictures and hashtags on Twitter. Really great job overall.

5
"Charcuterie: Slowing Meals Down In A Culture Of Busyness" by Mary Martin Harper 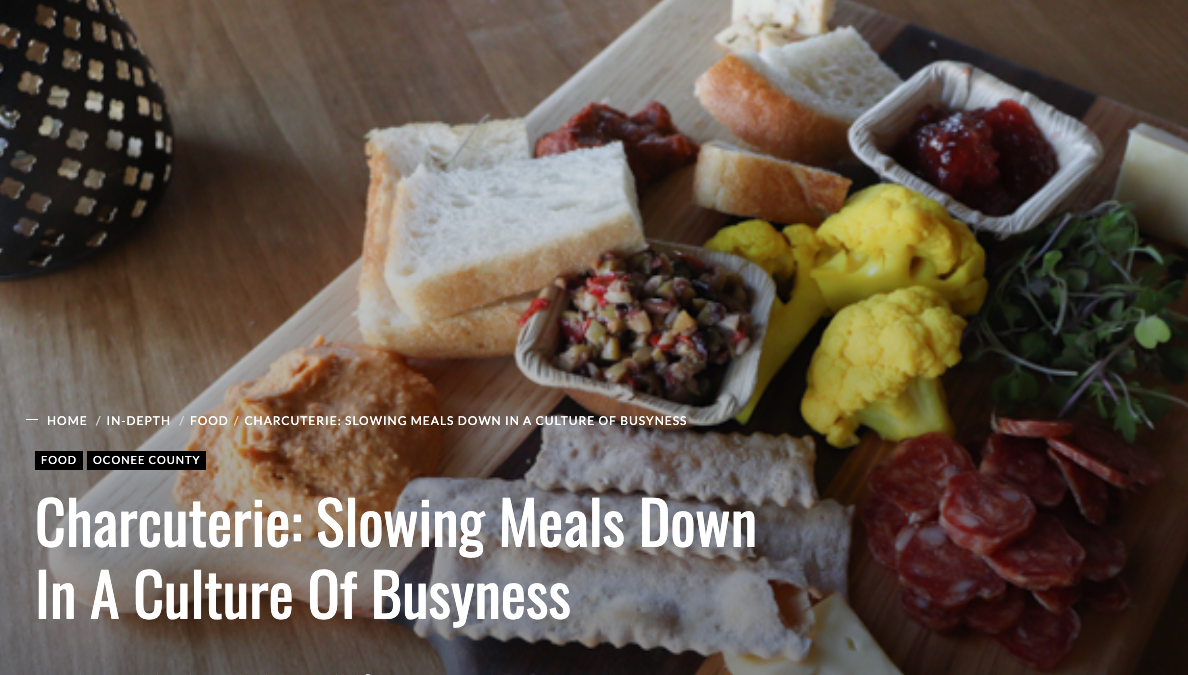 I saw more charcuterie boards on my Thanksgiving timeline than turkey. They’re such a hot topic right now, and I’m jealous these places weren’t around when I was at UGA! I think that local angle was your lead here. The data is great and there’s a way to weave it into the article, but you can get to it later. I’m not sure the “Why It’s Newsworthy” piece tells me why I should care, though. I would’ve liked to see something about how they’re trying to use locally made food to bring this European concept to Northeast Georgia there instead. The section about the history of charcuterie is great, but I think you could’ve also worked it in later in the article. The pull-quote at the very bottom would’ve been a great way to tie it in after the meat (no pun intended) of the story. The visuals you used throughout the story are great. You say yourself how popular #charcuterie posts are on social media—so use those lovely pictures to push to your piece! I love the decision to embed a tutorial video in the story. I need to step my game up.

Today’s episode goes down as one of my favorites I have had the ... 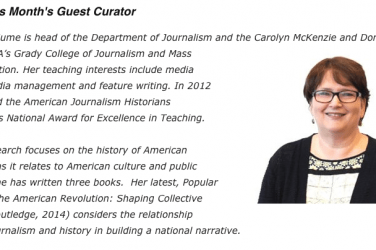 To further our mission to not only craft and showcase journalism at Grady, but ...

The Lead: David McCraw On Law And Liberty

In the fall of 2019, I had the pleasure of interviewing David McCraw, the ...