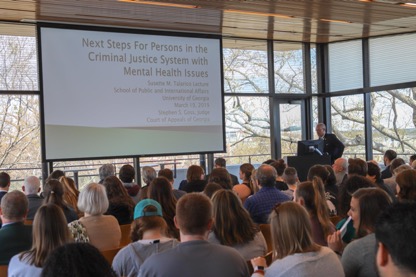 Half Of All Inmates are Mentally Ill, So Why Are They In Jail?

Just to be clear, if you’re in jail, chances are you are accused or have been convicted of committing a crime. What may not be clear is whether you suffer from mental illness. On Tuesday, March 19, a Georgia appellate judge told a room full of criminal justice students, civil servants and colleagues that the lack of mental health services and resources has led to the incarceration of millions of mentally ill people.

Judge Stephen Goss spoke at the University of Georgia, Baldwin Hall in an annual lecture hosted by the Criminal Justice Department. He emphasized the number of people who are mentally ill and in jail. According to the Bureau of Justice, in 2006 more than half of all prison and jail inmates, including 56 percent of state prisoners, 45 percent of federal prisoners, and 64 percent of local jail inmates, were found to have a mental health problem.

Goss described this as the “transinstitutionalization phenomenon” where mentally ill patients are frequently found in jail or prison after being discharged from mental facilities or community care policies.

Why It’s Newsworthy: According to Mental Health America, six out of 10 of the states with the least access to mental health care also have the highest rates of incarceration. Georgia is one of those states.

Judge Goss also explained that 72 to 90 percent of jail detainees with a mental disorder also have cooccurring substance disorders.

“Most of the people that come into court for drugs are doing it as coping method for some mental illness. Nobody decides they want to become a meth addict.”Goss

According to the Substance Abuse and Mental Health Services Administration (SAMHSA), in 2017, 8.5 million adults aged 18 or older had both a mental illness and at least one substance use disorder.

Those who have undergone childhood trauma, post-traumatic stress disorder, or domestic violence are also at an increased risk of incarceration within their lifetime, according to Goss.

Judge Goss also connected the large number of mental health in custody with a history of stigmatization. He described Georgia’s first mental health asylum opened in Milledgeville in 1842, whose name was the “Georgia State Lunatic, Idiot, and Epileptic Asylum.”

Goss says the stigmatization of the mentally ill has improved but requires constant attention. “Mental illness is a genetic and biological disorder the same way you could be predisposed to hypertension or diabetes,” Goss says.

The National Alliance on Mental Illness (NAMI) is one of the oldest mental health advocacy groups in America. #StigmaFree is NAMI’s campaign to end stigma around mental health. It aims to change the landscape through social and systemic means. The public can take a pledge online to end mental health stigma.

Goss says that Georgia has improved significantly over the past century and is “ahead of the curve” in terms of creating new judicial programs and addressing mental health, but much remains to be done.

“What we have today is a patchwork-quilt system that is better in some areas and worse in others.”Goss

Currently, Georgia has numerous Treatment and Accountability Courts whose job is to provide an alternative to people who have been charged with a nonviolent criminal offense which was influenced by their mental illness. For example, a mentally ill person may participate in a weekly mental health clinic rather than serve probation.

Elisa Zarate is the coordinator for the Athens Clarke County, Treatment and Accountability Court.

“The main goal of the court here in Athens is to help frequent low risk criminals manage their mental illness or substance abuse, so that they don’t end up back in jail.”

Goss described similar ideas to curb the number of incarcerated mentally disabled people. These changes include approaches that divert low risk mentally ill from jails such as community policy and solutions to removing mentally ill detainees who are not criminal threats from jail.

While Georgia court room officials may be creating new procedures to address mentally ill people in the criminal justice system, much work remains to be done, not only systematically, but socially and culturally before Georgia can adequately solve its incarceration issue.

Viet Nguyen is a senior in the Grady College of Journalism and Mass Communication.

Georgia Baseball Off to Historic Start With Series Win Over Vanderbilt 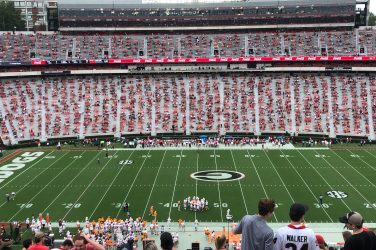 Podcast: G-Day Is Back 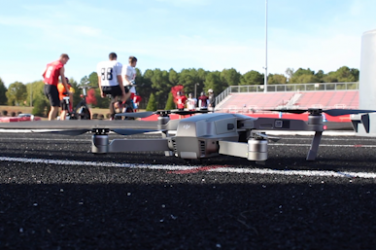 Advancements in technology have reached the football fields in Athens-Clarke County. Drones, ipads and ...