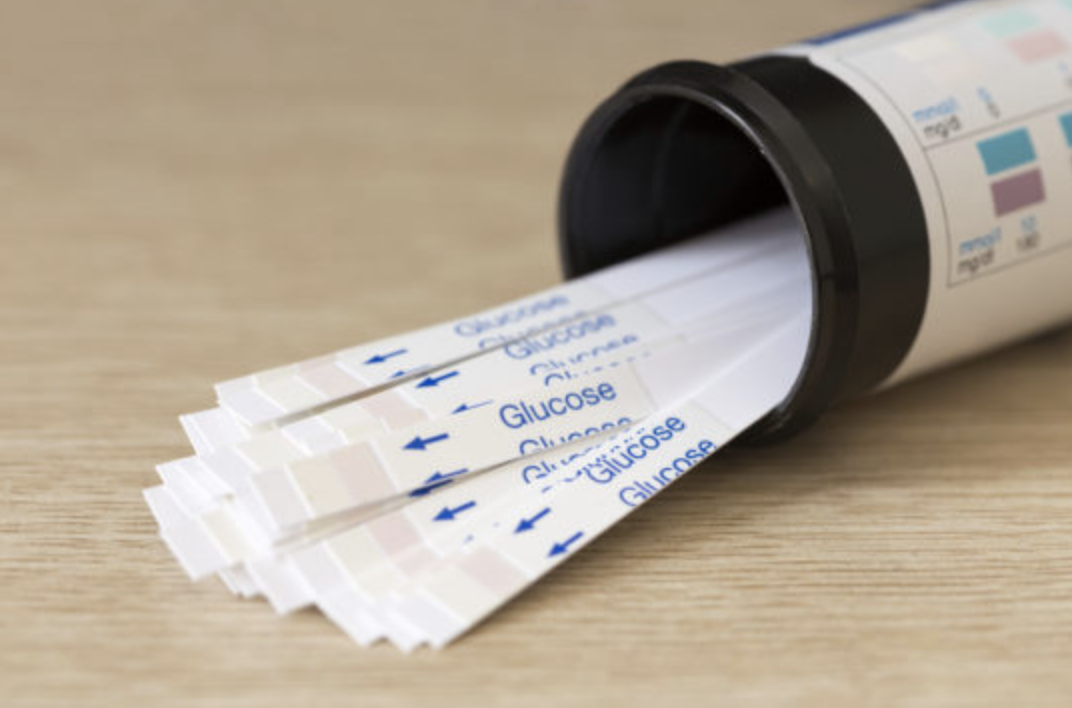 The small yellow yard signs began to appear this spring, seemingly overnight and without fanfare. They’re peppered across the parking lots of shopping centers and along the stretch of U.S. Route 78 that runs through downtown Athens.

People diagnosed with diabetes spend more than $3,000 per year on supplies, according to 2018 estimates from the American Diabetes Association, and test strips are a crucial part of their daily routine. The thin slivers of paper are used with a glucose monitor several times a day to check blood sugar levels, so patients can determine how much insulin they need to inject to control their condition.

A number of companies — such as Test Strip Search, Fast Cash Strips, Diabetic Strips 4 Cash and others — buy unused supplies from people who have too many.

According to Dr. Mohammed Ali, an associate professor at Emory’s Rollins School of Public Health and a primary care physician, some people with diabetes may have an excess of test strips due to inefficiencies in the health care system.

“Test strips are technically recommended only for people who are using insulin, because the idea is that they should be able to help by measuring your glucoses on a regular basis,” he said.

“Unfortunately, over the years, there has been some excess use of them and prescription of these, in that a whole lot of people who don’t use insulin or just use a long-acting insulin were given these glucose strips.”

And then market forces come into play.

“You have really a sort of imbalance in the supply-and-demand situation where the wrong people are getting” the test strips, Ali said. “Those that really need them, and are in unfortunate circumstances, are not being covered for them,” he said.

People who have strips that they don’t need may want to sell them, so those who need them can buy them.

They resell them via online marketplaces like Amazon, eBay and Craigslist. Even a search for “diabetes test strips” on social media sites such as Facebook brings up a number of groups and posts offering to buy or sell the strips.

This flourishing secondhand commerce is catching the attention of manufacturers, patients’ advocates and federal health officials. It’s a profitable “gray market” in which products are redirected through nonstandard channels of distribution. And it’s perfectly legal.

“I’m taking advantage, as are my peers, of a loophole,” the owner of one resale website told The New York Times earlier this year. “We’re allowed to do that. I don’t even think we should be, frankly,” the person said.

Some others agree that the situation has gotten out of hand. The state of California began to regulate the supply chain of diabetes products two years ago as part of an effort to prevent fraud. And patient safety is also emerging as a concern. Federal officials are homing in on both problems.

“We recognize that some people may be choosing to purchase pre-owned or unauthorized test strips because they believe there is a cost savings,” said Tim Stenzel of the Food and Drug Administration’s Center for Devices and Radiological Health, in a warning to consumers issued in April.

“However, by doing so, they may be putting themselves at risk for serious injury or even death,” he said in the announcement, which warned of the risks of infection and inaccurate results.

More than 30 million Americans reported having diabetes in 2015, according to data from the American Diabetes Association. Rates are particularly distressing here in the Southeast, in states such as Georgia, Alabama, Mississippi and Louisiana. That’s what makes this region attractive for resale businesses.

According to the Georgia Department of Public Health, the death rate from diabetes in this state is 8 percent higher than the national average.

Test strips often come in packs of 50 or 100, and a pack can range from $50 to $200 if purchased without assistance from insurance. Georgia requires that patients have a prescription to purchase test strips from a medical supplier, but the resale of these strips is legal for both buyer and seller, as it is in many other states.

The head of TestStripSearch.com, Wendy Carrier, as well as other corporations that buy and resell test strips in Georgia, were contacted but declined to comment for this story. However, their websites and advertisements on social media detail a how-to guide for people who want to make money on the supplies they have.

The American Diabetes Association estimates that more than 1 million people in Georgia have diabetes, and many of those people don’t even know they have the condition. There are an estimated 50,000 diabetes diagnoses each year.

Medical expenses for those living with the condition are around 2.3 times higher than those who do not have it. The American Diabetes Association estima­tes that people with diabetes spend an average of $11,744 on health care expenses yearly.

Ali said he’s not aware of any statistics on average medical expenses for Georgians who have diabetes. But he believes the trends in this state are similar to those nationwide.

“Strips are certainly very expensive, and part of that expense makes them an interesting commodity,” he said. “In some respects, we are unfortunately getting it wrong in terms of a lot of people getting excess strips that they don’t need. And, vice versa, those that really need them, and are in unfortunate circumstances, are not being covered for them,” he said.

The resale companies say their services help get unused test strips into the hands of patients who otherwise would have trouble acquiring them, such as the uninsured who can’t get a prescription. Patients who sell their unused strips get cash, and the companies profit by reselling the products, generally at a higher price.

“With our program, everyone wins!” declares the website quickcash4teststrips.com, which says it distributes unused test strips locally first, but also says strips sold outside the local area are 75 percent to 80 percent cheaper than retail.

Most of the resellers claim that they only buy packs of strips that are unopened and not past their expiration date.

Do You Know What You’re Getting?

That may be good for the seller, but Donald Walker, director of the Atlanta Diabetes and Prevention Group, a nonprofit that helps educate patients with diabetes about their condition, says he has heard multiple negative reports from patients who used these distributors to buy products.

“Some of the test strips were open. Some were defective,” Walker explained. “The quality of the product was just affected in some regard,” he said, citing poorly packaged products and unusable goods.

Manufacturers of test strips generally send their products directly to pharmacies, and they say they are able to certify quality and offer warranties only on products sold by these authorized distributors. Those products have been evaluated for proper handling, shelf life and authenticity.

Authorized suppliers also can ensure that a particular kind of test strip will work with a patient’s specific glucose meter, said Diana Hidalgo of the customer support team of Ascensia Diabetes Care, a leading manufacturer in the blood glucose test strip market.

That’s important, because getting the wrong equipment is risky. Patients in Georgia and elsewhere who buy diabetes supplies secondhand are being warned about potential inaccuracies in their blood sugar readings, which can lead to the administration of too much insulin, or too little.

Ali said that type 1 diabetes patients, who are using insulin “because it is lifesaving,” depend on accurate readings of their blood sugar levels.

“If they had erroneous readings that led them to adjust their insulin incorrectly, they could either end up bottoming out and having hypoglycemia, where they drop too low, which is also potentially fatal,” he said. “Or they could go the other way, where they underdose themselves and end up going too high.”

The FDA said in April that it is closely monitoring reports of adverse events associated with the testing issue. Consumers should report problems directly to the FDA by calling 1-800-FDA-1088 or visiting MedWatch, the agency’s safety information and adverse event reporting program.

Yunxuan Gu is currently pursing her master’s degree in journalism at the University of Georgia’s Grady College of Journalism and Mass Communication.

Chris Herbert is a freelance journalist and graduate student at the University of Georgia. His interests lie in health, investigations, content moderation, security and privacy. Chris’s previous work has appeared in Yahoo!

Naomi Thomas is an Athens-based intern for Georgia Health News.

The Hiking Culture of Lumpkin County

The Changing Fight Against Property Crime in Athens

Mamie Hillman has lived in Greene County for 65 years. All throughout those years, ...

It’s been over five years since a fair came to Athens, Georgia. And that ...