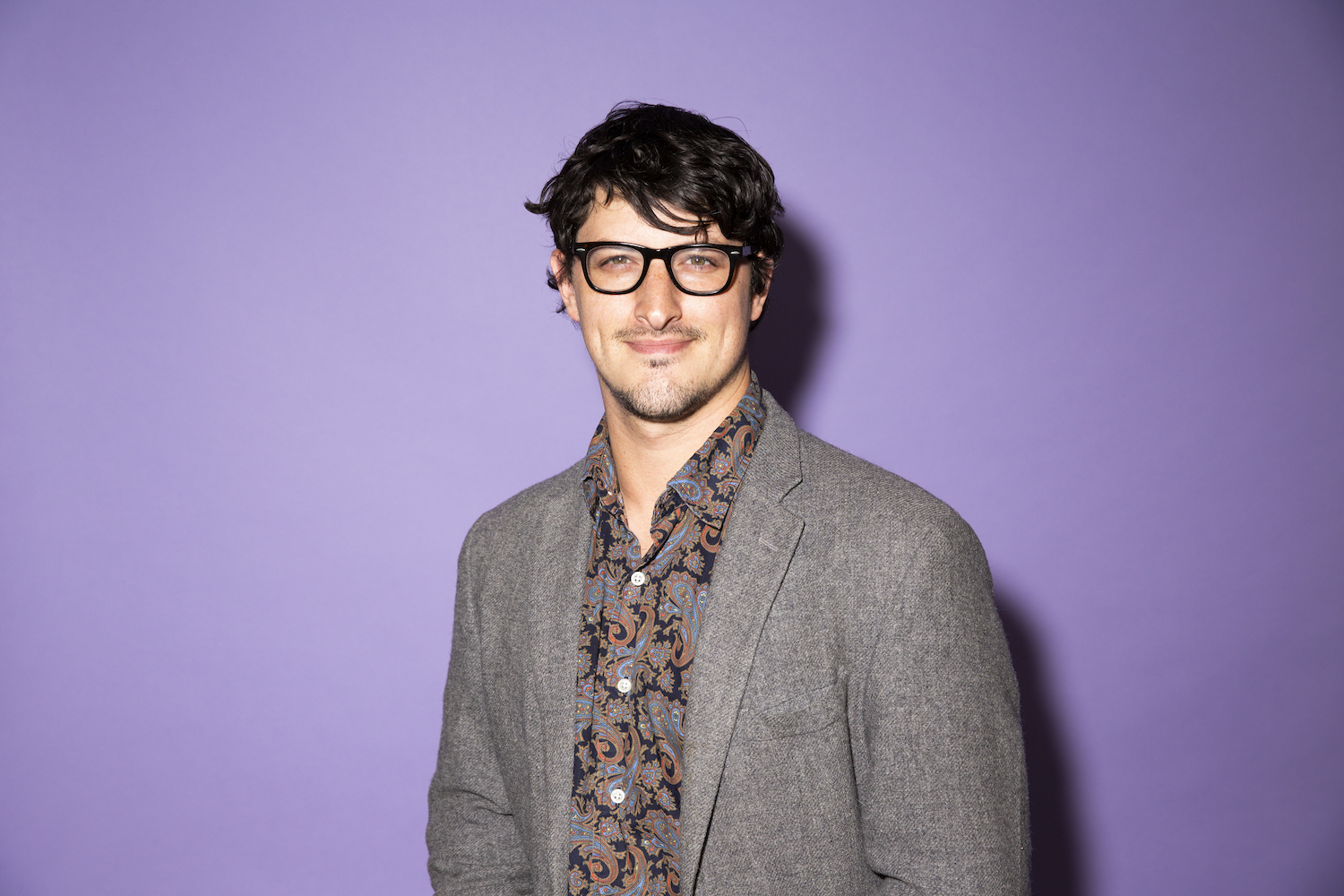 To further our mission to talk about process and quality in journalism, each guest curator has highlighted what he or she sees as the “don’t want to miss” pieces posted to Grady Newsource that month, along with some constructive reflection about the journalism.

Nick Fouriezos is the senior politics reporter for OZY Magazine, where he covers the Trump administration, the 2020 elections and Congress. He writes about the ways policy affects people, while uncovering the new and the next in innovators and ideas. He has reported business, culture and news stories from all 50 states and six continents while at OZY. He interned at the St. Augustine Record, the Baltimore Sun and the Atlanta Journal-Constitution while attending the University of Georgia, where he graduated with degrees in journalism and English, with a creative writing focus.
1
"'A Matter of Ethics and a Matter of Equity': Students Request Systemwide Pass/Fail Grading Option for University System of Georgia" by Cameren Rogers 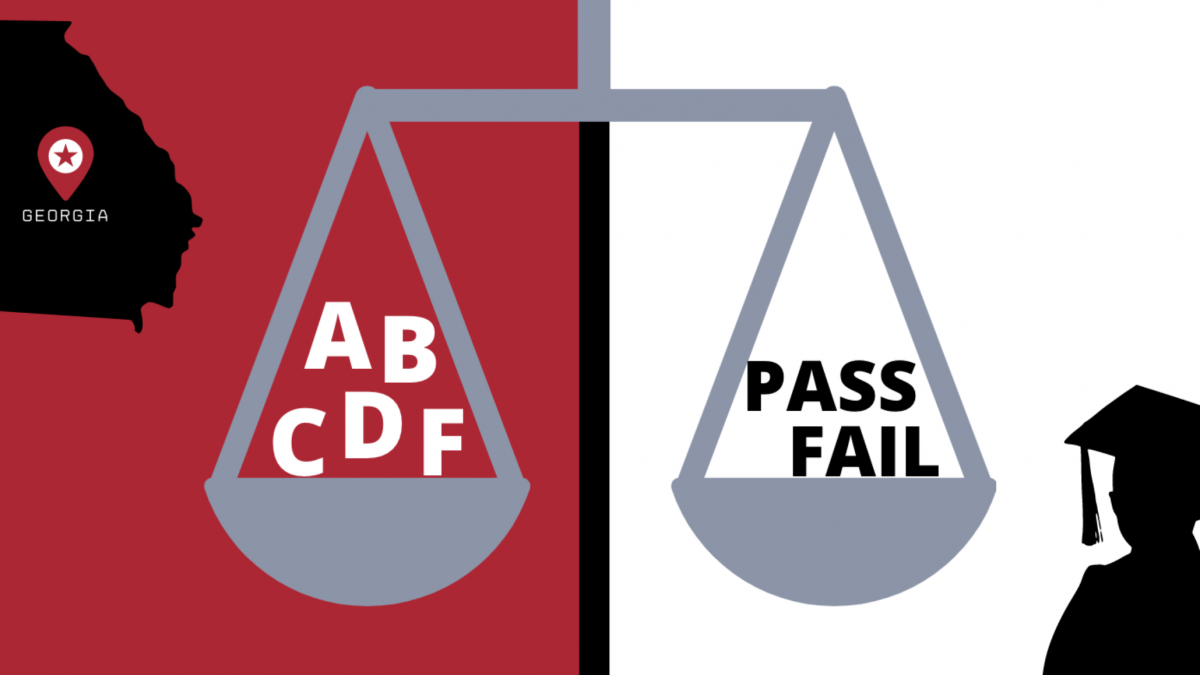 This is a fantastic subject to cover, and the stats really underline how much UGA stands out in its choice not to implement a pass/fail option. It was particularly smart to include two facts—that every other state has at least one public university already doing this, and the fact that every single one of UGA's peer institutions has this option. The inclusion of the chart emphasizes this point, and it's worth reflecting on ways to make direct comparisons like this in other weighty topics as well.

If there is an area to grow in here, it's that the piece could have done a better job surfacing the human stakes involved with a policy decision like this. While covering politics for a living, I'm often forced to find ways to take raw numbers and figures and bring them to life—without finding those affected by policy, stats remain a dull knife when trying to make your point. There are some examples later in the piece, and quotes from folks saying that this increases inequities. But I would have rather seen more show than tell. Who is the student that had a borderline "C" or "B" grade, may lose HOPE or fail if they can't make up their grade, and now has to go back to a home with a poor internet connection? Or find a way to bring the stories of student workers and others caught in a bind up to the top. 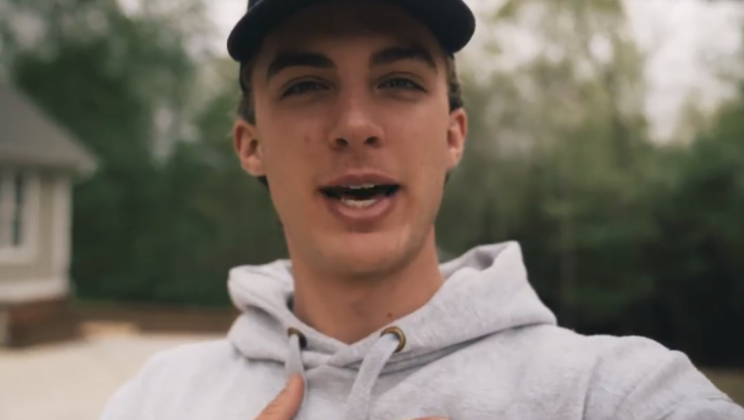 I love that Newsource is implementing "reporter's notebook" features in its coverage. As a journalist, I'm often dismayed by the lack of transparency we give our readers/viewers into our reporting process. And these behind-the-scenes or more personal looks at something in the news can lend incredible insight, allowing us to put aside the stoic newsperson hat for a moment and show a more human side. Such techniques should be used sparingly, but being more creative and personal on social media and in blog-type formats is a great way to grow your brand and outreach. Not every piece needs to be a long-form article or video to get its point across powerfully.
Typically, I would say any good photo essay should spotlight people—their faces, their energy, their characters. But there is something eerie, almost haunting, in this series. Their absence echoes the absence we're feeling in most of our public spaces, and the places we love, like Walker's and Athens in general. I'm glad the photographer chose to spotlight places that have special significance to their daily life as well, while also incorporating larger news stories like the gas station and the church advertising its online service. The notebook on one Grady student's grandfather was an excellent window into one person's life as well, and well worth telling.
3
"Transgender Inclusion In Athletics Variance In Policies Govern How They Compete, Some May Be Changing Soon" by Katie Jackson 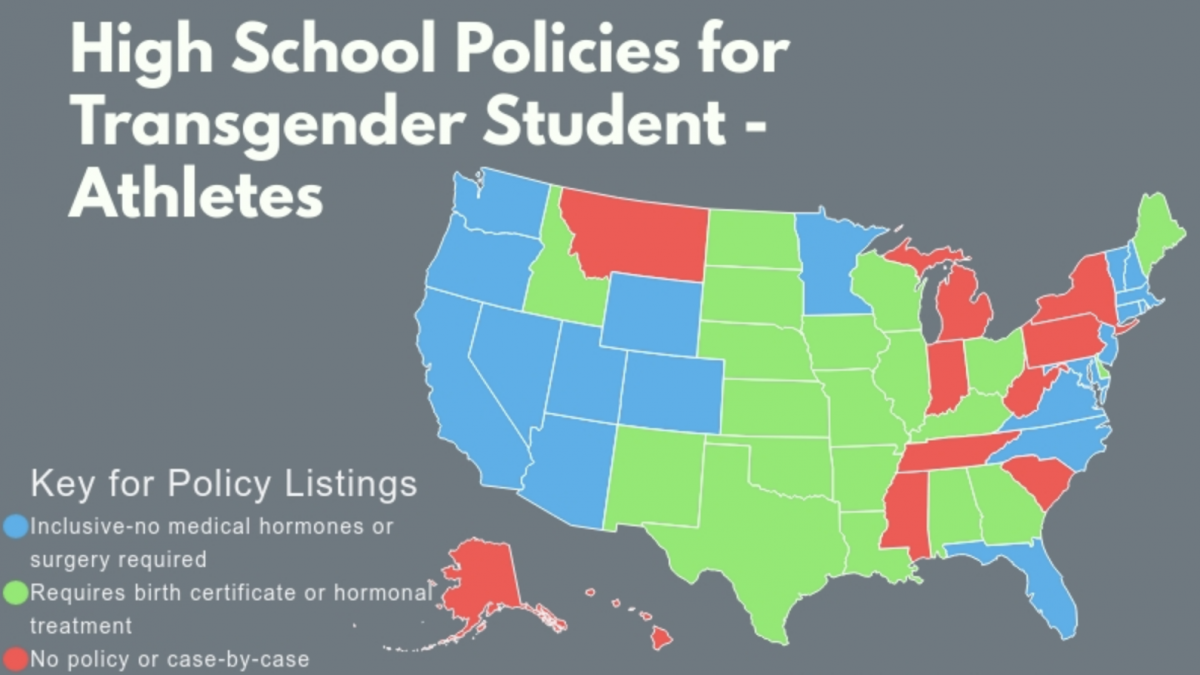 This is an intriguing topic that unfortunately falls flat. But it's worth reflecting on why. The target of the piece is well chosen: exploring how the inclusion of transgender athletes affects university athletics programs. However, it introduces too many avenues of exploration, too early. The first three lines suggest a conversation about athletes breaking barriers and their critics. The fourth graf uses a stat to suggest an exploration of how various states approach the transgender athlete question on the high school level. And then the fifth drops an entire NCAA policy verbatim onto the page, without much needed context for its importance. With the "new findings" section, it suddenly shifts again, becoming a piece about whether or not suppressing testosterone negates the athletic advantage.
Organization is critical to any form of news coverage. Remember that your job isn't just to provide information, but to provide context. So don't be afraid to state clearly what your thesis is—the nut graf, as most newspaper folk call it—and then contend with that thesis. Use transition sentences to make obvious why you are including a fact or a detail. News reporting is meant to convey objective truth, but it is also a form of argument: shape your argument by figuring out what the message is, what the supporting evidence is, the potential criticism and then the final closing piece.
4
"What Gov. Kemp's Plans Mean for Northeast Georgia Businesses, Employees" by Celeste Springer 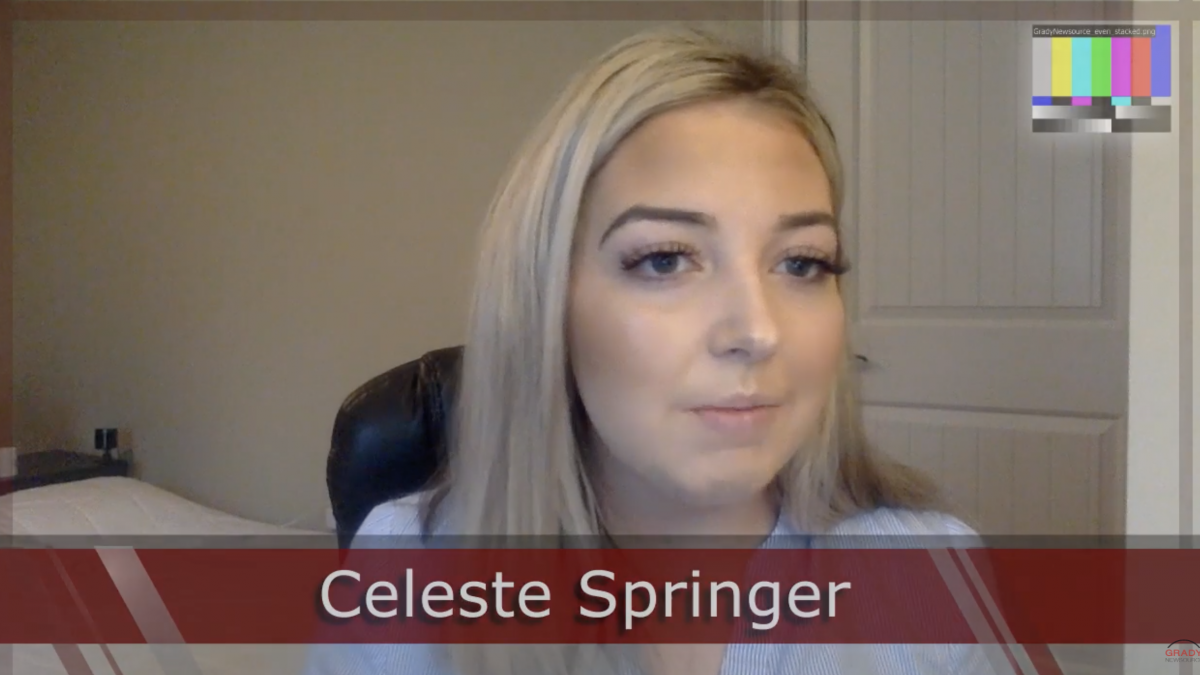 I'm pleased to find a wide array of creative reporting from reporters on the Newsource YouTube channel. I focus on this piece because it smartly uses video conferencing technology to get direct feeds from key sources about a pivotal issue for Northeast Georgia businesses—the potential re-opening of the state announced by Gov. Kemp.
With her "very last day" at Newsource, reporter Celeste Springer delivers a powerful, newsy piece. She also gets creative with using the b-roll footage available to her—turning the locks on her own doors, flicking on and off her own light switches and revving up (what I assume is) her own car. There are no excuses next time a reporter says they can't come up with material, whether it's on camera or not. If Celeste can do it during a pandemic, so can you.
5
Grady Newsource's COVID-19 Coverage 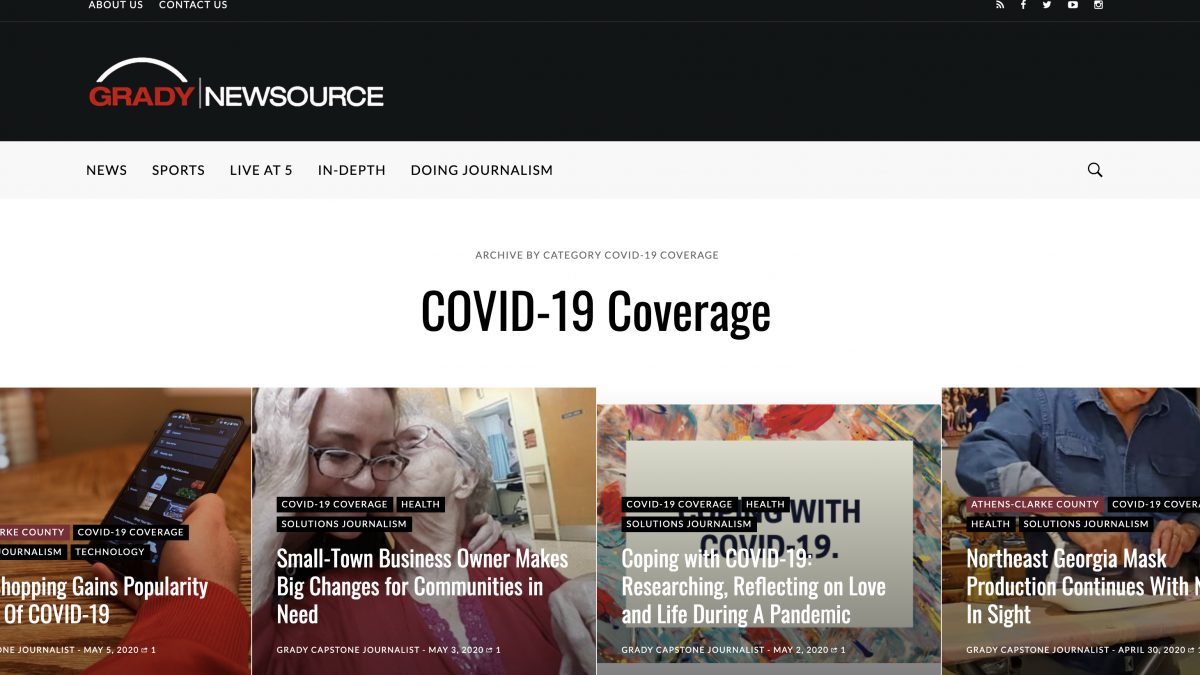 For this item, I'm choosing not to focus on any one story, but to focus more broadly on your COVID-19 landing page. In a time of deep turmoil, it is so heartening to see the breadth of your coverage—from useful DIY wellness suggestions (yoga, grocery and fitness tips) to personal accounts (reporter's notebooks) to news pieces covering the local economy, businesses and government. Other than firefighters, journalists are the only ones you find running toward the fire—and you all have done that.
With this coverage, reflect on the fact that despite being under an intense amount of stress and pressure in your own personal lives, you've continued to follow your vocation. Having spoken to a few of you in mock interviews the past week, I'm moved beyond belief by your courage and adaptability. I also want you to know that it is OK to be afraid, too. Especially you seniors (as a 2014 grad, I remember obsessively worrying about getting that first job...and that was without an epidemic and recession looming). Trust one thing, regardless: The doors that close to you always bring you closer to where you are actually supposed to be. I've found that to be true in my career, and I have faith that you will in yours as well.

In this annotation, Jonathan Crandall interviews Kala Horvat to discuss the process of ... 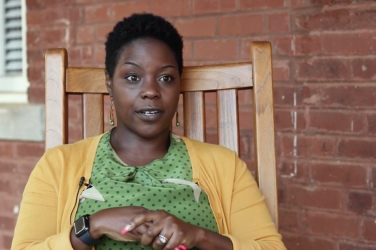 One of Sydney Fordice’s goals for this story was to bring awareness to ... 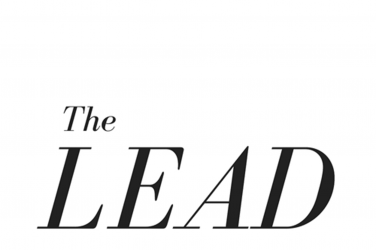 The Lead: Elizabeth Jensen on Taking an Objective Look at the Media