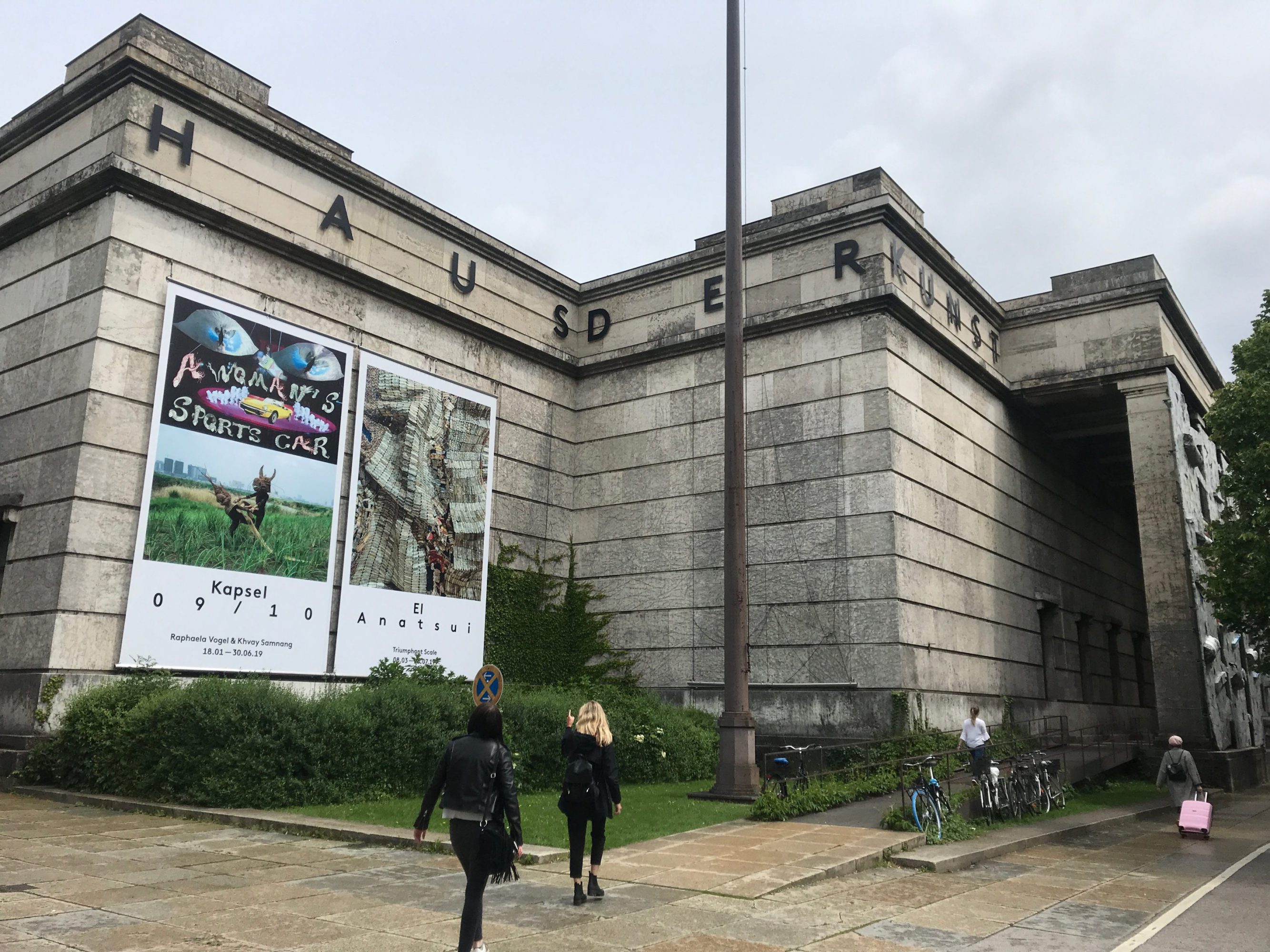 Not one, but hundreds. Green and orange mosaics decorated by this infamous shape are paneled on the ceiling at one of the last remaining structures in Munich that feature stark reminders of it’s horrific past.

The Haus der Kunst, or The House of German Art, is a popular spot in Munich since it houses dozens of contemporary art pieces and exhibitions. It also holds history as it was once a showcase of Nazi propaganda. Adolf Hitler himself chose the artwork that lined its walls. Hitler himself had art removed if he thought it wasn’t good enough. Haus der Kunst stood to show art, but with Hitler as the supreme judge of that definition.

Even though the Nazi propaganda art has been removed, the infamous red flags have been stripped away, and now there’s even a club that cranks pop music on the weekends – the symbol of the Nazi regime still remains.

Why It’s Newsworthy: The German people, as well as many others around the world, struggle with how to face their historical burdens. The challenge is whether to keep reminders in public places as points of reflection and educational tools, or if these artifacts should be demolished to allow the horrors of war to disappear from people’s minds.

Munich is where Hitler raised his fist in triumph at crowded beer halls, where plans were drawn for the world’s first concentration camp and where National Socialism was born and raised.

Munich is also the home of the Haus der Kunst. Author of “Haus Der Kunst, Munich,” Sabine Brantl, says “from 1937-1945 the art inside the Haus der Kunst matched how Nazis saw life, race and nature—it was a Nazi view of the world in all the exhibitions.”

As a result, some believe these buildings including The House of German Art from the Nazi regime will always be tainted as they contain stark reminders of the “Third Reich.” Some believe these symbols keep Munich from growing into a city and community fully free from artifacts of hate.

The building’s row of towering grey stone columns stand in a uniform line like soldiers, and serve as a reminder of a fascist leader. A walk down the museum’s halls will also take you back to the 1940’s despite the contemporary art exhibition in the room on your right.

“These tiles are one meter in length, which is the length of the Nazi soldiers marching steps,” an information guide from the Haus der Kunst staff said as he told me to look down at the tile floor below me.

The Haus der Kunst is just one of many buildings, like the Reichsbank and the “Führer Building,” preserved from World War II that allow traces of destruction to remain apparent along the city streets. Architecture that represents a murderous regime can be especially difficult to ignore when they stand next to shiny modern buildings and structures that promote a new Germany.

History class movie scenes that left my eyes wide open and jaw dropped came to life when I walked up the stone steps and into the grand hall of the Haus der Kunst. But, according to Brantl, that’s the point. She says,

it’s a symbol for the Nazi regime. But, it’s now a symbol for German history, and how Germany is handling their history.”

Today, Haus der Kunst has a different purpose. In addition to inviting contemporary artists to come and showcase their work, it also invites people to come inside, reflect and never forget.

“We have integrated the history into the exhibition program,” Brantl said as we stood in the archive gallery, which she thinks is essential to the museum’s role in society today. “It provides the opportunity for visitors to become informed and educate themselves.”

Even though both the outside and inside feature reminders of the past, by completing rebuilding of the Haus der Kunst, it would become “completely anonymous, thereby suppressing history,” says information guide Ulrike Ehret from the Munich Documentation Center for the History of National Socialism.

By preserving the Haus der Kunst and traces of its past, people are presented with vivid reminders of the human capacity for destruction, and the lasting effect that the evils of war can have on a country’s legacy.

In addition to the Haus der Kunst, many World War II buildings still stand today, or were restored with their original plans that now recall the period of National Socialism. For instance, Ehret says that the Reichsbank, the previous central bank of Germany, building was finished according to its original plans and visual style.

Further,  the “Führer Building” served as an office building for Adolf Hitler under the Nazi regime’s rule. In 1957, Munich’s Academy of Music moved into the space. Although this building now serves a completely different purpose, the architecture resembles Hitler’s taste through cold, stone pillars and rows of orderly and identical windows.

But, others have been reconstructed to “conceal their Nazi past, and the memories associated with the buildings are gradually erased from people’s minds,” says the Munich Documentation Center for the History of National Socialism.

The Americans insisted on the demolishment of the ‘Temples of Honour,’ which was burial place for the sixteen Nazis who were killed in the Beer Hall Putsch. Although they kept the foundations, about a decade later, they became platforms for plants.  Königsplatz, a square in Munich, was removed and was restored with lawns and walkways.

Other traces of war now stand as memorials. According to the Munich Documentation Center for the History of National Socialism, Josef Wiedemann transformed the 21-meter-tall Siegestor, or the Victory Gate, into a memorial in 1945. He included a new inscription that reads

Scars to Tell a Story

Now, when walking around the city streets of Munich, shiny gold storefronts showcasing the finest Gucci and Prada bags, bustling McDonald’s, and Apple stores stand next to Neoclassical buildings that appear straight out of a black and white Nazi film.

A simple walk down the city street can also serve as a nod to what was – and what shall never be again.

Gillian McIntyre is a junior majoring in journalism at the Grady College of Journalism and Mass Communication at the University of Georgia.

Getting Known When You’re Not Known: Local Musicians And How They Promote Themselves

Throughout the 20th century, musical artists have created promotion techniques to give themselves the ...

Students in the Advanced Photojournalism course were charged with showing the story of campaign ...