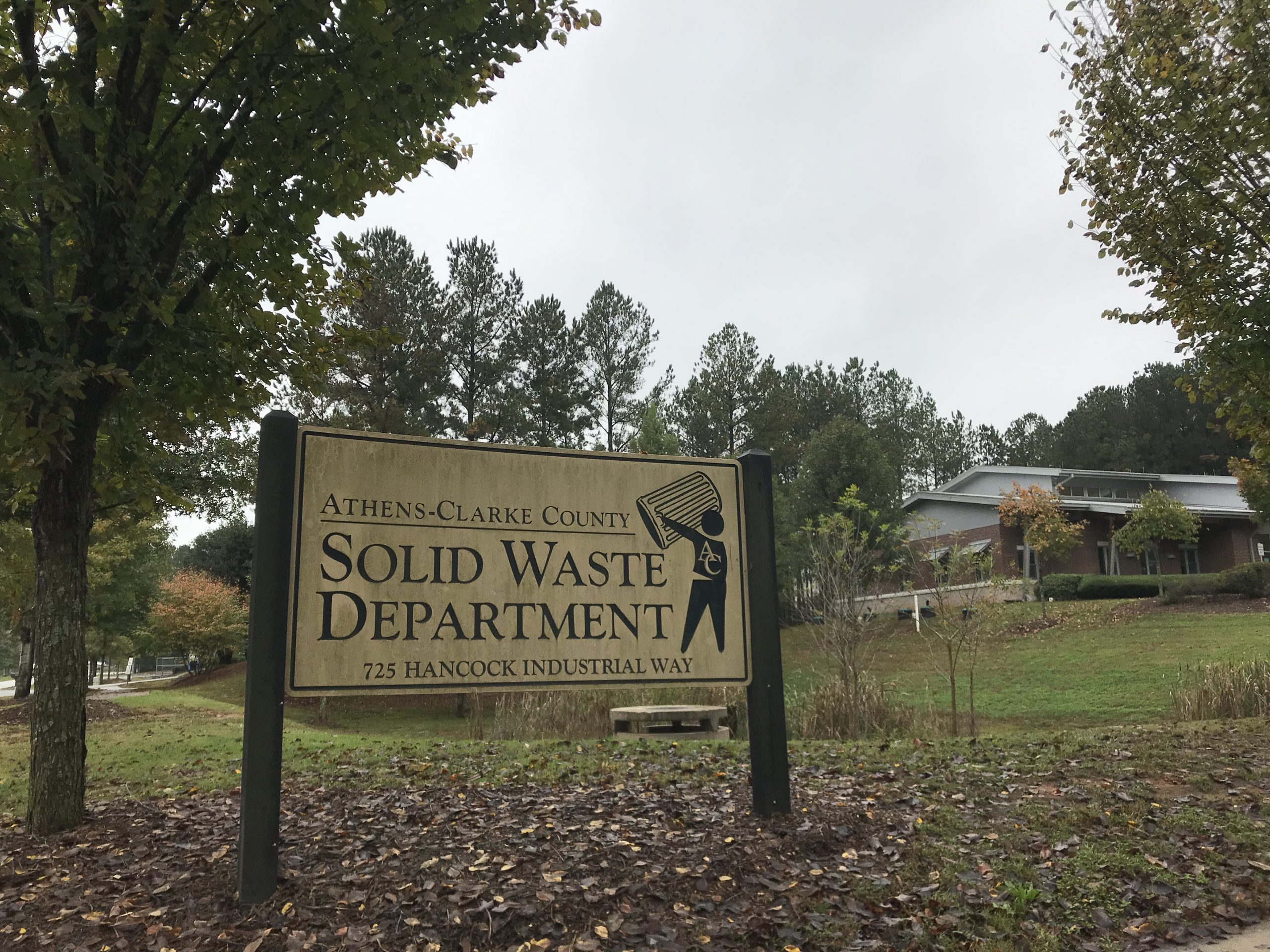 If you assume your trash today gets collected and sent off to one of the “dumps” you see in cartoons, you’re sadly mistaken.

Dumps haven’t existed since the 1970s; rather, the increasing amount of Municipal Solid Waste (MSW) Americans create gets sent to landfills where local governments like Athens are actively trying to recycle and compost on a daily basis.

MSW sent to landfills is growing to over 250 million pounds annually, according to the Environmental Protection Agency, which harms the environment by contaminating the air we breathe and the water we drink through released toxins, according to the Toxics Action Center.

However, with new recycling and composting innovations brought to you by cities like Atlanta and Athens, material management has the potential to improve.

We’ve all heard the catchy phrase: “Reduce, Reuse, Recycle.” And we’ve all seen the classic green recycle bins in our communities. But if reducing our material use is listed first in this phrase quoted to presumably save the Earth, how is the community reducing MSW just as much as they’re attempting to recycle it?

In Athens, Georgia, the Athens-Clarke County Solid Waste Department opened their Commercial Composting Facility in January 2011 to improve material management and decrease food scrap waste in a community where food insecurity is one of the most prominent in the state.

Today, more than 26,000 individuals in Athens-Clarke County are food insecure, according to a 2016 report by Feeding America. 40 percent of food scraps are going to waste while 20 percent of the population faces hunger. However, local entities like the ACC Solid Waste Department, UGA Office of Sustainability and local businesses are working to improve their awareness of the material waste disparity in this community.

To gradually combat this issue and better manage our materials, Athens has improved both recycling and composting opportunities for businesses since 2010, now reaching 90% material diversion from landfills to composting and recycling.

Why it’s Newsworthy: As one of only two cities in the state of Georgia to have a Center for Hard to Recycle Materials (CHaRM), Athens, Georgia has the potential to live a zero waste lifestyle (90 percent material diversion from landfills) through increased recycling opportunities for materials like styrofoam, corporate composting and mandatory single-stream recycling for ACC businesses.

“We’re currently working on increasing collections for our young food scraps collection program, which involves going around to businesses and collecting containers filled with residual organic debris that can be sent to our composting operation sourced out of the landfills,” said Dunlop.

According to Dunlop, about 11-12 percent of what goes into our landfills in Georgia is food scraps. However, in the last decade several requirements for businesses have been made to help divert a significant amount of material waste from entering our landfills.

In 2010, ACC implemented single-stream recycling–a system in which mixed recyclables are handled in one collection process–which has increased recycled tons processed by 10 percent. In 2013, the ACC Recycling Division implemented a commercial ordinance requiring all businesses and nonprofits to have recycling collection, education, and an approved plan on file. And in 2015, the Center for Hard to Recycle Materials (CHaRM) was implemented as a “one stop drop for items that can’t be recycled at the curb or at the ACC recycling drop-off sites due to their chemical composition, hazardous components, size, shape, etc.”

Unlike other cities in Georgia, Atlanta and Athens have the infrastructure, such as the CHarM, that can allow citizens to recycle to the point of a zero waste lifestyle, which, according to Dunlop means: “If  you’re a business and you show that you can divert 90 percent or more of your material waste from landfills, you can get a certificate that you’re a zero waste community,” said Dunlop.

What sets Athens and Atlanta apart from the rest of the state is their new program: the Center for Hard to Recycle Materials (CHaRM) which allows the opportunity for citizens to recycle more industrial materials they couldn’t before, such as styrofoam.

By utilizing this innovative program for complex recycling, landfill material waste for more industrial recyclables have to potential to decrease. While not every person in Athens composts or recycles, the CHaRM is a step in the right direction to decrease this community’s carbon footprint.

Not only are government-run programs supporting local composting and recycling initiatives, but so are licensed businesses in the Athens area.

Athens is one of two local governments in the state of Georgia that has a mandatory recycling policy, according to Dunlop. While the city of Griffin has one that applies to their residential citizens, Athens has a policy that applies to businesses.

Additionally, there are 25 businesses, organizations and other entities in Athens who comply with the ACC Solid Waste Department’s food scrap collections pick-up to support material management. The collections happen around two to three times a week, depending on the entity’s pick-up preferences.

Getting Comfortable with Sustainability

Local businesses like Maepole and Creature Comforts, and even local events like the Twilight Criterium bike race, partner with the ACC Solid Waste Department to both recycle and compost food scraps to help achieve 90 percent material diversion from landfills and work to be zero waste entities.

Jacob Yarbrough, Head Cellerman and Sustainability Lead at Creature Comforts (Athens location) has worked to gradually help implement a sustainable culture for the business in addition to single-stream recycling.

“In order to grow sustainability in a business like ours, I believe it takes three phases over time: incubation, launching and entrenching,” said Yarbrough.

Creature and the Community

In addition to single stream recycling, Creature Comforts has business specific practices they partake in to promote sustainability. Whether its re-sanitizing kegs for reuse or recycling packaged aluminum cans, Creature Comforts aims to stay aware of how they impact the environment.

We want to make the best beer as efficiently as humanly possible. I really want to build a program that helps us become a very sustainable company but also encourages and inspires the people in our community to adopt efficient practices in their own lives,” said Yarbrough.

A major sustainable practice the company promotes is selling their spent grain to local ranchers for cattle feed. Spent grain is the compact waste of malt and/or grains left after mashing and lautering in the brew house, according to Craft Beer and Brewing. After Creature gets full use of their grain, they simply give the spent grain to a local farmer in Ila, Georgia, for cattle fodder rather than trashing the crop.

The brewery also has a strong relationship with the UGA Office of Sustainability. For the last three school semesters, the brewery has partnered with the university to have a sustainability internship, currently filled by UGA engineering major, Thomas Spoere. Yarbrough says Spoere has already designed piece of equipment used to reduce the company’s water usage.

From Brewing to Composting

While Creature Comforts is primarily a brewery, the company maintains a commitment to food composting as a part of their brewing process.

“Sometimes we’ll work with ingredients that are compostable. For example, if we’re making a coffee stout we’ll use 60 pounds of coffee grounds from 1000 Faces Coffee, then compost the grounds. We also make fresh juices here, so when the tasting room staff juices a bunch of grapefruits, those rinds are then composted as well,” said Yarbrough.

Introductions to innovative recycling programs and implementation of sustainability internships and careers are just the beginning to Athens businesses adopting zero waste operations.

“In this community, if you recycle everything that you can, make your purchases wisely, use the CHaRM to its maximum potential and compost as much material as you can, there’s not much left to send to waste,” said Dunlop.

Athens local entities now have the potential to embrace 90 percent material diversion from landfills and adopt a zero waste lifestyle more than ever. As for residential sustainability practices, it’s a matter of influencing human behavior and learning from the businesses that are setting the standard.

Talley Davidson is a 4th year majoring in journalism in the Grady College of Journalism and Mass Communication and minoring in Spanish in the Franklin College of Arts and Sciences.

Anthems playing… Flags flying… Veterans saluting… Friends and family arriving to give their thanks. ...

UGA Professors who are experts in Marine Biology have been involved in many studies ...