Terry England has a pretty full plate. As the State Representative for District 116 in Barrow County, he currently serves as Chairman of the House Appropriations Committee. For much of his life, however, food and agriculture have also played a large role.

England lives on a farm that has been passed down within the family since around 1865. His family grew cotton and subsistence farmed over the years, and England began gardening and growing produce in high school.

Why It’s Newsworthy: As the chairman of the House Appropriations committee, England serves in one of the most powerful positions in the state government. Even in this role, many of the conversations and decisions England makes are around the lunch table, something to which Georgians can relate.

From a young age, he was active in the Future Farmers of America, and has remained active throughout his life. He still serves on the local farm bureau board of directors.

“One of the things that brings me the most joy in life is planting a seed and watching a seed grow, or being there when a litter of pigs is born,” England said. “For ag in general, it’s just that sense of accomplishment and the pride that all of us are involved in producing food and fiber for this shelter and the world.”

In the private sector, England operated Homeport Farm Mart as a farm supply store until its closure in 2012. He is currently the president and CEO of Pete’s Enterprises, Inc. as a construction and agribusiness consultant.

Under the Gold Dome

As the appropriations chairman, every dollar allocated by the state passes under England’s eyes. According to the Georgia Constitution, the yearly budget is the only piece of legislation the General Assembly is required to pass each session; with all appropriations bills beginning in the House, this falls on the shoulders of the committee chair.

Even though his top priority is the budget during session, England holds his seat on the Agriculture and Consumer Affairs committee close to his heart.

The two committees overlap, with the Appropriations Committee ultimately allocating funds each year to the Georgia Department of Agriculture.

England has to stay up to date with current issues and needs in the agriculture community, from hurricane recovery efforts to initiatives like the Georgia Grown program under the DOA. The agriculture industry varies across the different regions of the state, from cotton and peanuts in South Georgia to rows of chicken coops in the Northeast corner. With the growth and fluctuations in Georgia’s business and agriculture climates, awareness of complications across the whole state is important for England to appropriate funds to maximize the effectiveness of the expenditures.

“With the northern half of the state, growth is still an issue for just about everybody, whether that’s Northeast Georgia or Northwest Georgia,” England said. “When you get into Southeast and Southwest Georgia, the pressures you have there are that we’re at a low spot on commodity prices and on livestock prices.”

With that said, England still finds time to enjoy food and the community it brings.

On any given day during the legislative session, chances are a free meal can be found, whether it is sponsored by a group of lobbyists or outside advocacy organizations. As the chairman of Appropriations, however, England doesn’t always have time for a meal on the busy days.

“I have a lot of meals around the conference table in my office,” England said. “It’s just whoever shows up, you’re welcome to come get a plate of whatever and talk. It’s always a matter of who’s there, and everybody is important.”

Dr. Audrey Haynes is an associate professor of political science and the director of the Applied Politics Certificate program at UGA. As part of the program, students have the opportunity to go to lunch with guest practitioners in the political field following the class period. She said food helps facilitate discussions between the students and professionals, and this relationship building is key to starting a career in the field.

“I think we really don’t do enough talking, especially with people outside our immediate family or friend group,” Haynes said. “Here’s a situation where the activity itself kind of encourages that dialogue.”

England represents the constituents of District 116, but his role in the General Assembly affects Georgians across the state. Food is a medium for England to connect with people from all walks of life, whether they identify as Republicans, Democrats or not part of the political sphere.

“Multiple times during the session, we sit around the table, we’ve said grace, and we’ve broken bread with one another,” England said. “When you sit there eating, whether it’s barbecue or fried chicken or whatever it is, you have conversations that take your mind off whatever the problems are of the day, and you start to talk about family, loved ones and the things that are important to you.”

Within and outside of public service, however, England shares some of the same interests as residents in Barrow County and around the state: agriculture and good barbecue.

Matthew Couper is a senior majoring in journalism and political science in the Grady College of Journalism and Mass Communication and the School of Public and International Affairs at the University of Georgia.

The Georgia State Senate will meet Tuesday and on its schedule is a bill that ... 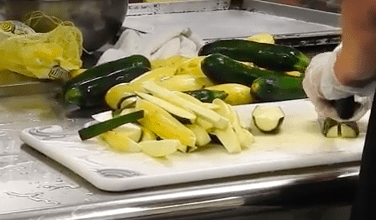 The food insecurity rate in Athens-Clarke County was 22 percent in 2016, according to ...