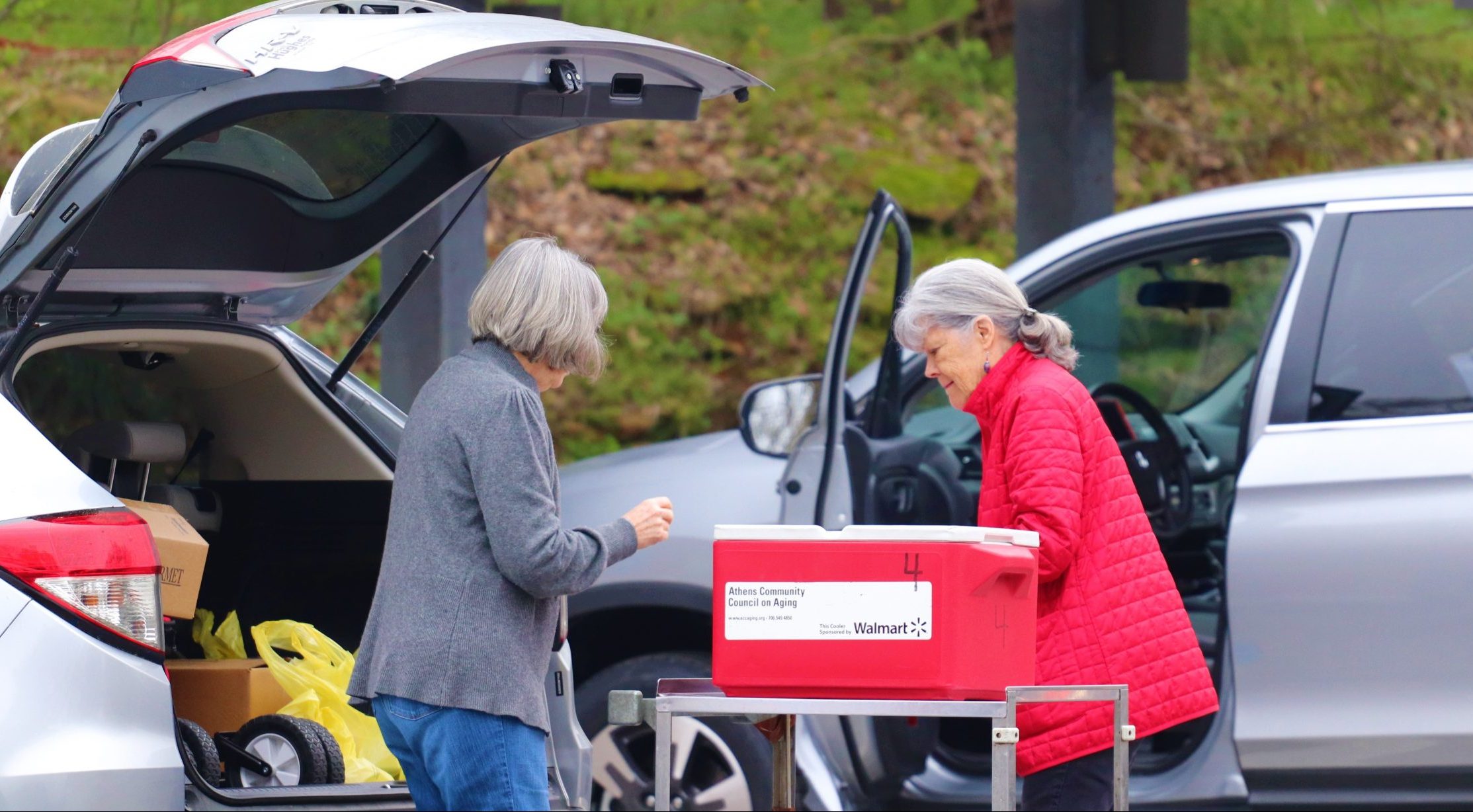 Meals on Wheels volunteers load their cars in preparation to deliver food to older adults in and around Clarke county. Each volunteer has a set route which consists of stops to the homes of older, homebound adults. (Photo Courtesy/Amy Lancaster)
Share
Tweet
Share
Pin
4 Shares
Views: 2,351
Why It’s Newsworthy: Food insecurity is a long-standing issue in Northeast Georgia, and during the outbreak of COVID-19, demands for food among members of more vulnerable populations are heightened. In Clarke County, the local Meals on Wheels chapter has increased the number of elderly people they serve.

The outbreak of COVID-19 has created a culture of uncertainty, prompting questions like “Can I go to the grocery store?,” “If I go outside, will I get sick,” or “When will I be able to see my family and friends again?”

For the older population, these questions hold even more weight.

People 65 years and older are at high risk for severe illness from the virus and are advised to stay at home, according to the CDC, and for people who already have limited access to resources, the precarity could be detrimental. In Athens, the local Meals on Wheels chapter, an extension of the Athens Community Council on Aging (ACCA) that provides food and other essential services to food-insecure seniors in the Athens area, is extending its reach to all local seniors. Food insecurity refers to the limited or uncertain availability of nutritious and safe foods or to the limited or uncertain ability to purchase or receive food, according to the United States Department of Agriculture.

On March 3, 2020, ACCA released a statement explaining that, in response to the outbreak of COVID-19, it closed a majority of its programs and shifted daily operations. ACCA developed an “emergency food relief” plan of action in order to continue to provide aid to members of the local senior population. The plan of action includes the continuation of the Meal on Wheels program, food and commodity bag drive-through pick-up every Monday, Wednesday and Friday at the ACCA campus from 11 a.m. to 2 p.m., grocery and other essential deliveries, transportation to critical medical appointments, “buddy calls” and other virtual activities.

Since the beginning of the outbreak and subsequent shelter-in-place orders, Meals on Wheels Coordinator Jennifer Shaikun said the organization has added close to 50 people to its list of meal delivery recipients. When factoring in the recipients of ACCA’s other emergency food relief services (like the bag drive-through pick-up), Lancaster said that number is closer to 500.

“We have over 800 seniors now that we’re feeding weekly, which is a massive undertaking,” Lancaster said. “During COVID-19, our motto is we’re leaving no senior behind. We do some screening questions, but we are making sure that everybody that needs it is getting food.”

ACCA orders the food from the Foodbank of Northeast Georgia and a few private companies, Lancaster said. For Meals on Wheels recipients, a typical delivery of groceries include products like milk, bread and vegetables, but Lancaster said paper products (like toilet paper) are in the highest demand recently.

Play this video to see what’s in a typical Meals on Wheels delivery.

Staff members also recently began adding recipes to the bags, so recipients could get creative with the products.

“Three of our staff members came up with an idea to make recipes based on what was in the bag each week,” Lancaster said. “Basically you get your bag of food, and you can make a recipe up from what was in there.”

“Like many places, we did not have a budget for that,” Lancaster said. “Everybody’s adjusting. We did not anticipate these expenses.”

The organization is now relying heavily on money from private donations and alliances with corporate partners in order to try and offset the costs, Lancaster said.

“It’s always difficult for us as an agency even before the crisis,” Shaikun said. “The need, and the waitlist for people to get Meals on Wheels far exceeds what we’re able to do. A lot of times I think it’s up to the lawmakers and the people who are setting the budgets and allocating funds to support older adults.”

Locally, food insecurity has been a long-standing issue in Clarke county and in the state of Georgia. In 2017, the rate of food insecurity in Clarke County was 20.6%—almost 6% over the state average, according to the most recent data from Feeding America’s “Map the Meal Gap” project.

“Within the next two weeks, we are going to open applications to broader community response needs with local funds, including those of the aging population supported through Meals on Wheels,” said Mayor Kelly Girtz in an email.

Social Isolation in the Elderly Population

Access to groceries isn’t the only barrier to the aging population during the outbreak of COVID-19. Meals on Wheels also works to address an often-overlooked issue amongst elderly people: loneliness.

In 2017, about 28% (13.8 million) of all noninstitutionalized older persons lived alone, according to a report by the Administration for Community Living’s Administration on Aging of the U.S. Department of Health and Human Services. Living alone puts older adults at risk for loneliness and social isolation, which are linked to physical and mental implications (like high blood pressure, anxiety and depression) according to the National Institute on Aging.

“We’re really focusing on food and some sort of social connectedness,” Shaikun said.

Lori Carroll, a Meals on Wheels volunteer, has delivered food to seniors with Meals on Wheels for about 20 years. Carroll said she usually has about nine people on her route and, over the years, has developed close friendships with many of them. Now, Carroll said the visits feel different.

“There were a couple people on my route that I’d go in and we’d sit in the living room and chat some and have a longer visit,” Carroll said. “We really haven’t done that because they don’t want to come outside, so it’s just a little different. I don’t want to say impersonal, but it’s different.”

Meals on Wheels coordinators have implemented “buddy calls” for volunteers to chat with clients, but Carroll said her full-time work schedule is a major conflict when it comes to volunteering.

“I think old people are a treasure,” Carroll said. “Some of them are forgotten and that just breaks my heart, and I think that this whole COVID-19 thing is exasperating that, too.”

Jessica Hamlin is a senior majoring in English and journalism in the Grady College of Journalism and Mass Communication at the University of Georgia.

Meals on Wheels volunteers load their cars in preparation to deliver food to older adults in and around Clarke county. Each volunteer has a set route which consists of stops to the homes of older, homebound adults. (Photo Courtesy/Amy Lancaster)

Meals on Wheels volunteers load their cars in preparation to deliver food to older adults in and around Clarke county. Each volunteer has a set route which consists of stops to the homes of older, homebound adults. (Photo Courtesy/Amy Lancaster)
NEXT STORY

Meals on Wheels volunteers load their cars in preparation to deliver food to older adults in and around Clarke county. Each volunteer has a set route which consists of stops to the homes of older, homebound adults. (Photo Courtesy/Amy Lancaster)

Meals on Wheels volunteers load their cars in preparation to deliver food to older adults in and around Clarke county. Each volunteer has a set route which consists of stops to the homes of older, homebound adults. (Photo Courtesy/Amy Lancaster)
PREV STORY

Oglethorpe County, in northeast Georgia, is the state’s 17 county, and its 441 square miles ...

Is Gurley Still in the Race for Heisman?

Athens, GA –  With still no resolution in Todd Gurley’s reinstatement, the bulldog nation is ...