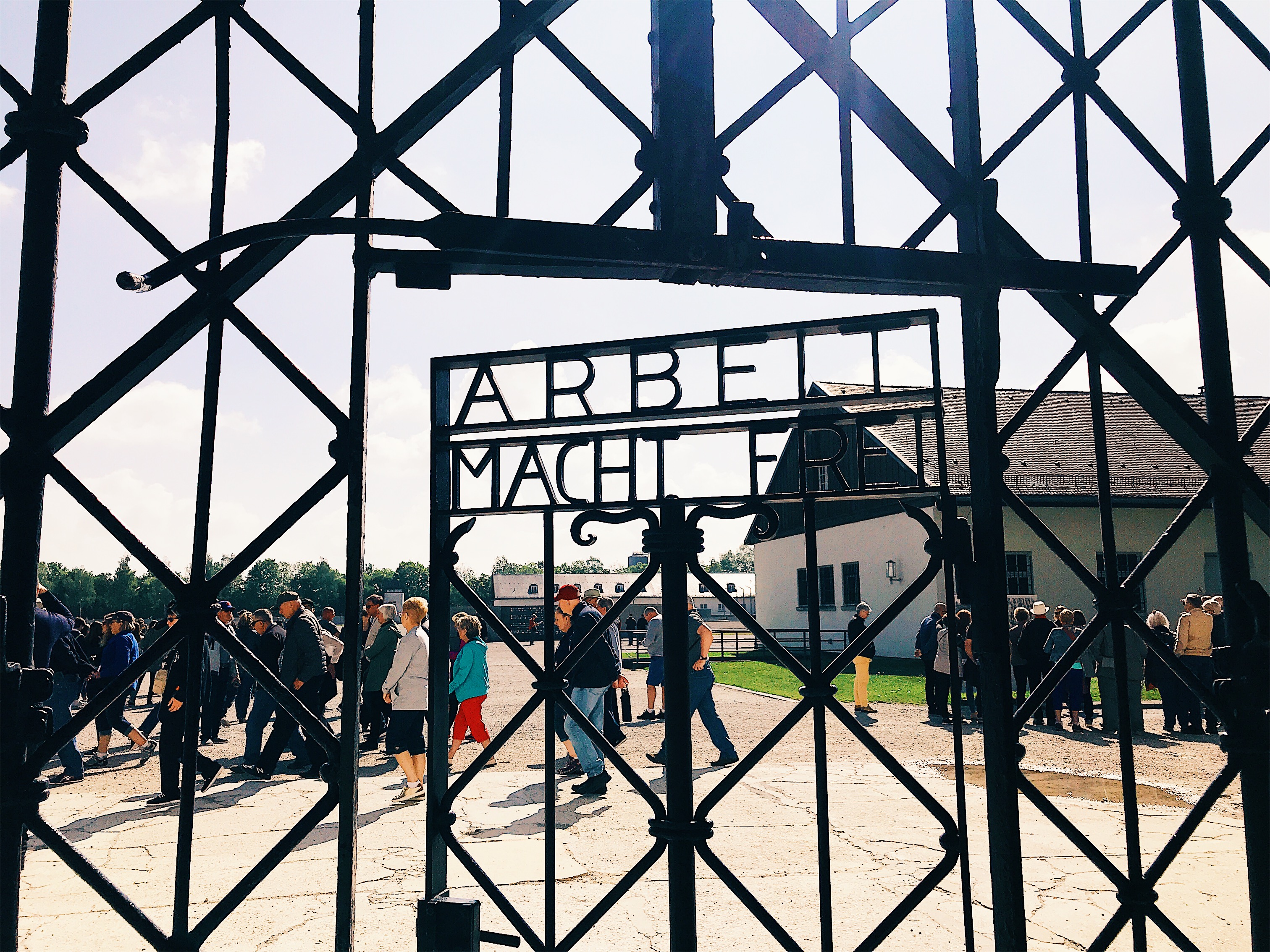 Black iron gates mark the Dachau Concentration Camp Memorial Grounds with the promise “Arbeit Macht Frei”—“Work will set you free.” For the more than 200,000 prisoners who walked through these gates, their stolen properties, names, and dignities would never be reclaimed.

Why It’s Newsworthy: In the decades following the systematic murder of millions of humans, many wonder why it happened. Dachau is the irreplaceable monument in Holocaust history that shows how it happened.

The Dachau Concentration Camp, located in southern Germany, opened in 1933 as the first concentration camp under Nazi rule. Hitler became chancellor of Germany in January 1933, and only three months later, Dachau’s reign began on the grounds of an abandoned factory.

According to the U.S. Holocaust Memorial Museum, more than 188,000 prisoners passed through Dachau’s gates. Those unfit for Hitler’s vision of Germany ranged from political prisoners, Jews, the handicapped, Jehovah’s Witnesses, ‘asocials’, homosexuals and more.

The prisoners were “treated dependent on their rank in the camp,” said author Dr. Ulrike Ehret.

Ehret works at the new Holocaust Documentation Center in Munich. She said, “political prisoners had jobs like sorting clothes or sorting papers,” but adds the hardest labor was placed on the Jews.

“If anyone were to be targeted or picked on,” Ehret said, “it would’ve been a Jew.”

Used as the model for following concentration camps, Dachau set the stage for the long line of terror to follow.

Dachau was the third concentration camp liberated by U.S. troops in 1945. Colonel William W. Quinn wrote in his report investigating the camp aftermath that “Dachau will stand for all time as one of history’s most gruesome symbols of inhumanity… Dachau and death were synonymous.”

The facility is divided into two sections: the camp ground and the crematorium area. Both are open daily from 9 a.m. to 5 p.m. without appointment or entry fee according to the official Dachau website.

I did enough research prior to my visit to Munich to know I wanted to visit, and Munich visitor Laura Fasino agreed: “It’s important to visit while in Munich… to really understand what happened.”

Only at Dachau will you walk where the first Holocaust victims walked, and for many of the 32,000 prisoners who died there, that road led to the crematorium.

Off the beaten path, turn left from the central area to reach the crematorium building just out of sight. The small pathway winds through a barbed wire fence to reveal a brick chimney peeking through the shrubs, warning what’s to come. A memorial on the right reads “Denket Daran Wie Wir Hier Starben,” translating “Remember How We Died Here.

Until my Dachau visit, I had trouble reasoning with the realities of the Holocaust that I learned through textbooks – but standing in the gas chamber for the first time, I understood.

A concrete ceiling tops four cinderblock walls making up a small rectangular chamber. Black vents speckle the floor and ceilings. Two iron-barred windows serve as the only light source in the room. Look up–and you see the holes in the ceiling where the killing gas was released–holes now closed with cement filler. Finally, a grim, grey box camouflaged as a shower: the last sight of those who met their fate in Dachau.

“It’s just upsetting to see it in person,” said Fasino.

Dachau was infamous throughout Germany for its reputation, said Dr. Ehret. A children’s prayer at the time read “Lieber Jesu mach mich fromm dass ich nicht nach Dachau komm,” translating to “Sweet Jesus make me pious so I will not be sent to Dachau.” In the hands of Nazis, Dachau was successfully used as a power tool to place fear in children and adults alike.

The S.S. strategically released images of prisoners photographed at Dachau in orderly fashion to show Nazi’s are “a government that actually sticks to its word,” Ehret explained.

According to the Dachau Memorial Museum, the Dachau intimidation factor played a large part in solidifying Nazi power.

Despite its widespread reputation, Colonel Quinn’s report shows that the true reality inside the camp was hidden from civilians just outside Dachau’s walls.

In response to the bodies found on the Dachau death train, “In spite of the fact that one had known of its existence for years, has even spoken to people who had spent some time there, the first impression comes as a complete, a stunning shock,” Quinn wrote.

“One had always had — in the back of one’s mind — the reservation ‘but surely it is impossible for other human beings to do this to other people’,” he said.

Thomas Schlichenmayer, educator of eight years at the Dachau site, said that community recognition and ownership of the Holocaust is an “ongoing process.” Although Schlichenmayer noted a shift in mentality during the 1980s, even after all that time most Dachau citizens still approached the reality with a “them not us” defense.

But when you consider those who lost everything in Dachau, how could you not see it personally.

Entering the Dachau gate meant not only a loss of a name, but a loss of humanity. A thick remembrance book of Dachau prisoners rests on a wooden desk in one of the churches on the site. Forgotten faces, life stories, biographies, and once stolen names stare back at you from the pages.

Through the “Names Instead of Numbers” restoration project, volunteers like Schlichenmayer work to erase the numbers from those pages and give back the names and the the life stories of the countless victims of Dachau.

Only if we know what happened in the past can we look to the future.”

The Dachau Concentration Camp Memorial is primary evidence of the past that’s intended to send a strong message to the future—engraved on a memorial near the crematorium: “Honor the Dead, Warn the Living.”

Lorna Ramage is a junior majoring in journalism at the Grady College of Journalism and Mass Communication at the University of Georgia.

The front gates at the Dachau Concentration Memorial Camp translate "work will set you free." Photo/ Lorna Ramage
NEXT STORY

Krone-Bau: A Royal Tradition and Community Jewel in Munich 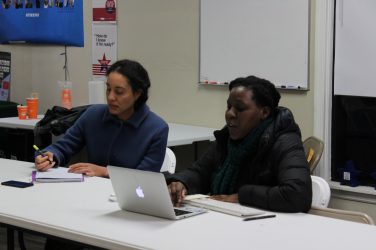 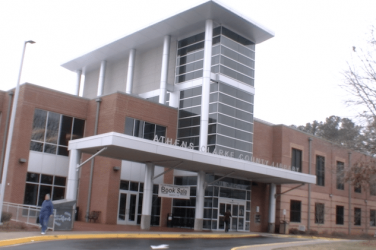 Public Libraries in Athens, Elsewhere Strive to Be About Much More Than Just Books 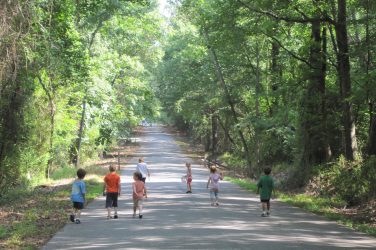