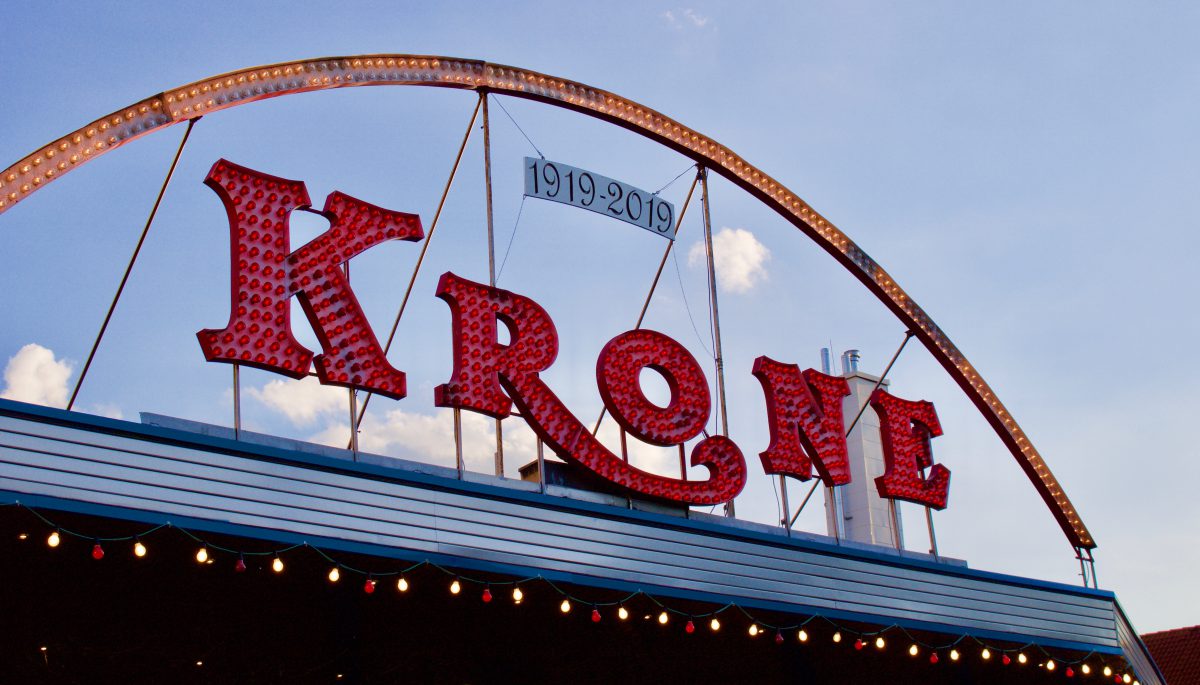 The time is 7:50 in the evening. Marquee lights shine a bright and vivid ruby red as the sun peeks through the overcast skies. The countdown bell clamors loudly to signal showtime. The only thing standing between me and Munich’s community jewel, Krone-Bau, are the silver gates.

Why It’s Newsworthy: This year, Krone-Bau celebrates one-hundred years of concerts, circus performances, and historical gatherings. With bright red marquee lights shining in the moonlight, Krone-Bau offers people an atmosphere filled with nostalgia, the smell of popcorn, and the chance to relive old memories and make new ones at Munich’s royal crown treasure.

Carl Krone opened Krone-Bau in 1919 with the phrase, “Your Favor – Our Strength” which became the motto of Circus Krone. Today, Carl Krone’s original mission holds true as “Family tradition, entrepreneurial spirit, love of animals and absolute seriousness” remain the foundations of Circus Krone.

I shuffle my way through the golden double doors across plush red carpet that leads me to an intimate arena. Dim, warm lights welcome guests into a u-shaped auditorium dressed with crimson velvet curtains, colorful bulb lights, burgundy pleather seats, and wooden beams that meet in the center of a circular ceiling. A black stage, not more than one-hundred feet away from the entrance, rests in the middle as one-hundred years of historical and legendary performances lies within the walls.

Circus Krone released a historical timeline of Krone-Bau and Circus Krone, “The Chronicle of Circus Krone,” to honor 100 years of history and tradition at Krone-Bau. In October 1919, Carl Krone debuted his landmark location of Krone-Bau at Marsstraße 43 in Munich, Germany. This location is now home to the circus’ Third Munich Crown House, which serves as the current Krone-Bau. It was inaugurated on December 23, 1962, in front of 3,000 guests, the Bavarian State Government, and Munich’s City Council.

Since then, Krone-Bau has remained under the management of the Krone family. It has hosted world-class performances by The Beatles, ACDC, The Rolling Stones, and Muhammad Ali. Most importantly, it remains home to their trademark show, Circus Krone.

Thirty-year-old Regina Handler has attended events at Krone-Bau since she was a child. Handler was there to attend a performance by the American rock singer, Suzi Quatro. She described the Krone-Bau experience, “You can see that it’s a circus. They’re really nice seats and you feel like a child there.”

“As a matter of fact, we’ve been here the day before yesterday… with my wife at another concert.” Hager goes on to say, “We come here frequently for concerts because it’s a nice, small little venue … It has a great atmosphere.”

Krone-Bau currently stands as the only permanent circus building in the German-speaking region. The circus dome itself is constructed with a beam-supported, cantilevered, ceiling that stands 18 meters high and has a seating capacity of 3,000. The all-encompassing venue includes permanent stables, various workshops, office space, cloakrooms, and trial mounts.

The Circus is Coming to Town

As the air becomes brisk and a faint smell of gingerbread lingers in the streets, Christmas returns with the premiere program at Circus Krone. Traditionally held on the first day of Christmas, Circus Krone kicks off its performing season at their headquarters in Munich. They perform here through March when the winter season ends. The 2017-2018 winter season alone brought more than 420,000 guests to the circus.

Circus Krone begins their Summer European Tour in April and with them comes the world’s largest, most state-of-the-art and secure circus tent of the modern era. There is no such thing as light packing when it comes to Circus Krone. The area of the tent is comparable to the size of a football field, whose roof alone is composed of 30 different pieces. The custom-made tent cost over 500,000 euros. During the circus’ traveling season, Krone-Bau becomes home to various concerts, lectures, musicals, and boxing matches.

Krone-Bau: A Tribute to Nostalgia

Most of us have a happy place where we return to seek comfort in our own childhood nostalgia––a place where we can’t help but have the slightest smile on our cheeks when reminiscing our happiest childhood memories. Handler’s face lit up with bright eyes and a smile stretching from cheek to cheek when she described her fondest moments at Krone, “As a child with ice-cream and watching the shows.”

For Munich locals like Hager and his fifteen-year-old daughter, Clara Belz, Krone is a traditional place where memories and experiences are passed down through generations. They were attending the Suzi Quatro concert as an early Father’s Day celebration. “This is the first time I’ve been in a few years, and I’m going with my dad,” Belz said.

Hagger shared his own childhood memories at Krone-Bau. “When I was a little boy, I’d been here with my parents. I remember that. That must’ve been about … forty-five years ago,” he said. “Yes––it was nice. I have a nice memory.”

To Hager and Belz, Krone-Bau isn’t just about tradition. It is a place for families and friends to come and make memories together. The entrance gates were filled with people greeting one another with hugs, hand-shakes, and conversations.

Likewise, his daughter, Belz, only has fond memories of her childhood visits to Circus Krone. “It makes me actually pretty happy because I remember, I’ve been to my first circus here,” Belz said.

They described the smells of popcorn and animals, the classic feel of the red marquee lights that turn on just before dusk. Smiles present on both of their faces as they reminisce on old memories and prepared to make new ones. Whether it be at a concert, musical, or the acclaimed Circus Krone, Belz described Krone-Bau as, “generally a happy place.”

Lauren Swenson is a third year majoring in journalism at the Grady College of Journalism and Mass Communication at the University of Georgia.

The marquee lights at Krone-Bau light up as the sun begins to set. (Photo Courtesy/Chloe Slafka)

The marquee lights at Krone-Bau light up as the sun begins to set. (Photo Courtesy/Chloe Slafka)
NEXT STORY

The marquee lights at Krone-Bau light up as the sun begins to set. (Photo Courtesy/Chloe Slafka)

The marquee lights at Krone-Bau light up as the sun begins to set. (Photo Courtesy/Chloe Slafka)
PREV STORY

The 2018 Department of Defense Warrior games are underway at the U.S. Air Force ...

You might be able to get rid of student loan debt without paying a ...