The American Academy of Pediatrics considers mental health as the “largest unmet health need for children and teens in foster care.” When looking at the prison population in the United States, or even the population that are homeless, you’ll find thousands have something in common: They were children in the foster care system.

Why It’s Newsworthy: Mental health funding cuts can indirectly impact children in foster care. The 2020 state elections decide who is in office in Georgia, and whether those individuals are running on a mental health platform can impact the priority of this issue in legislation.

More than 50% of homeless youth in a study by the Family and Youth Services Bureau reported living in a foster home. Within the first couple of years of leaving the foster care system, the Constitution Project found that 51% will be unemployed and 25% will be incarcerated.

Added to those statistics is the cost of children in the state’s care- your wallet might just be taking a fall as well. One abused child in the foster care system can cost more than $30,000 for medical and mental health treatment.

80% of children in the foster care system have significant mental health needs. Compare this to the 18-22% found in the general population, and we see the difference.

Children in the system “rely almost exclusively upon the public mental health system for services” and “use a disproportionate amount of Medicaid-funded mental health services”, according to youthlaw.org.

We do see that there’s over-prescription of psychotropic medications to kids in foster care,” said Allison Dunnigan, a UGA Social Work Assistant Professor who has studied the child welfare system. “There have been large studies nationally that have established that.”

Children in foster care are prescribed psychiatric medication at a higher rate than other Medicaid-eligible youth, anywhere from two to eight times more.

According to youthlaw.org, 91% of child welfare agencies amongst the majority of states ranked mental health services as an area in need of improvement.

Georgia falls short of helping the mental health needs of the community, according to one study by Mental Health America of Georgia. Out of 50 states, Georgia ranks 47 in the nation for access to mental health services and resources with over 2.3 million individuals living with mental illnesses.

There is a one in five chance an individual who suffers from a mental health disorder and lives in Georgia will end up in prison over a hospital.

“We see it in our criminal justice population, we see it in our child welfare system, we see it in the homeless. We see these untreated mental health issues that very often go untreated because of lack of access, so I think when our safety net has big holes we see people falling through them,” Dunnigan stated.

In Georgia, the COVID-19 pandemic and its economic impact have led to an increased cut in the 2021 budget, leading to a total of $2.2 billion in budget cuts across different departments. The Department of Behavioral Health and Developmental Disabilities sustained a $91 million cut. While one third of the cut ($29 million) was to adult developmental disability services, another $22.7 million was cut from child and adolescent mental health services. These cuts to the mental health agency led to 200 employees being laid off.

According to the Kaiser Family Foundation, Georgia is one of twelve states that has not acted on the national Medicaid expansion decision, which is one of the goals of the Affordable Care Act (ACA) enacted under the Obama administration.

When asked if Medicaid funds being cut would hurt the foster care system, Susie Weller, Families First Executive Director in Athens, was sure of her answer: “100%.”

Yet, she did have something positive to say about this: “I imagine foster kids will probably be one of the last to get cut- people do not want to cut children.”

Medicaid survived the Georgia budget for 2021, where Medicaid funding increased by $178 million to account for growing numbers from the pandemic.

Tammy Reed, the Placement and Permanency Section Director for the Georgia Division of Family and Children Services, emphasized the priority that foster care children have in funding for Medicaid. The issue is not direct cuts to funding for the children themselves, but the way non-essential programs that benefit foster care could be impacted by cuts.

A specific program Reed mentioned is peer-support services. These services incorporate foster care children who are doing well with children who need more help. They are usually privately run, and show high success rates. With department funding cuts, non-essential programs like this will be among those who are the first to face lack of funding.

Reed emphasized that the state departments do not focus on a specific candidate or an election, but it is rather the work they do once they get into office that matters.

Follow the links below and scroll over the map to see who is running in your county and in your districts. Then, compare the candidate’s mental health platforms in the chart below. 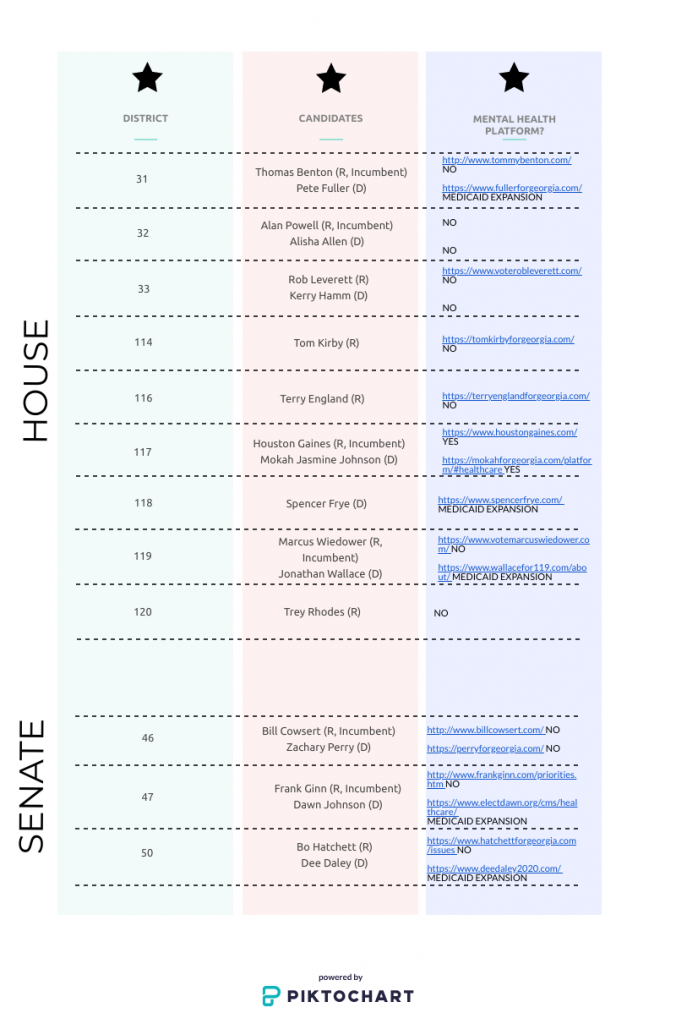 Abigail Chasteen is a senior majoring in political science and journalism in the Grady College of Journalism and Mass Communication at the University of Georgia.

The Georgia state elections and the candidates that have won have the potential to impact mental health funding and the access to care given to foster care children. (Graphic/Abigail Chasteen, using canva.com)

The Georgia state elections and the candidates that have won have the potential to impact mental health funding and the access to care given to foster care children. (Graphic/Abigail Chasteen, using canva.com)
NEXT STORY

How To Prepare Yourself For Holiday Political Conversations

The Georgia state elections and the candidates that have won have the potential to impact mental health funding and the access to care given to foster care children. (Graphic/Abigail Chasteen, using canva.com)

The Georgia state elections and the candidates that have won have the potential to impact mental health funding and the access to care given to foster care children. (Graphic/Abigail Chasteen, using canva.com)
PREV STORY 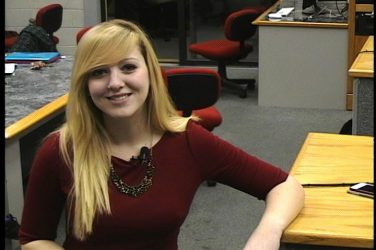 Athens, GA – Web Anchor, Meredith Dean, gives us an overview about what stories ... 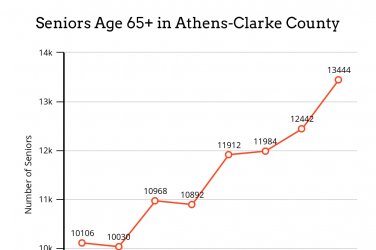 A Growing Population: Expanding the Senior Care Model in Athens

With the baby boomer generation aging, the number of elderly citizens of the United ... 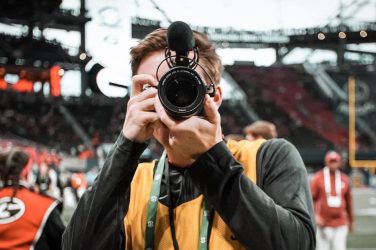 In May 2020, Pete Gottschalk graduated from the University of Georgia with a degree ...