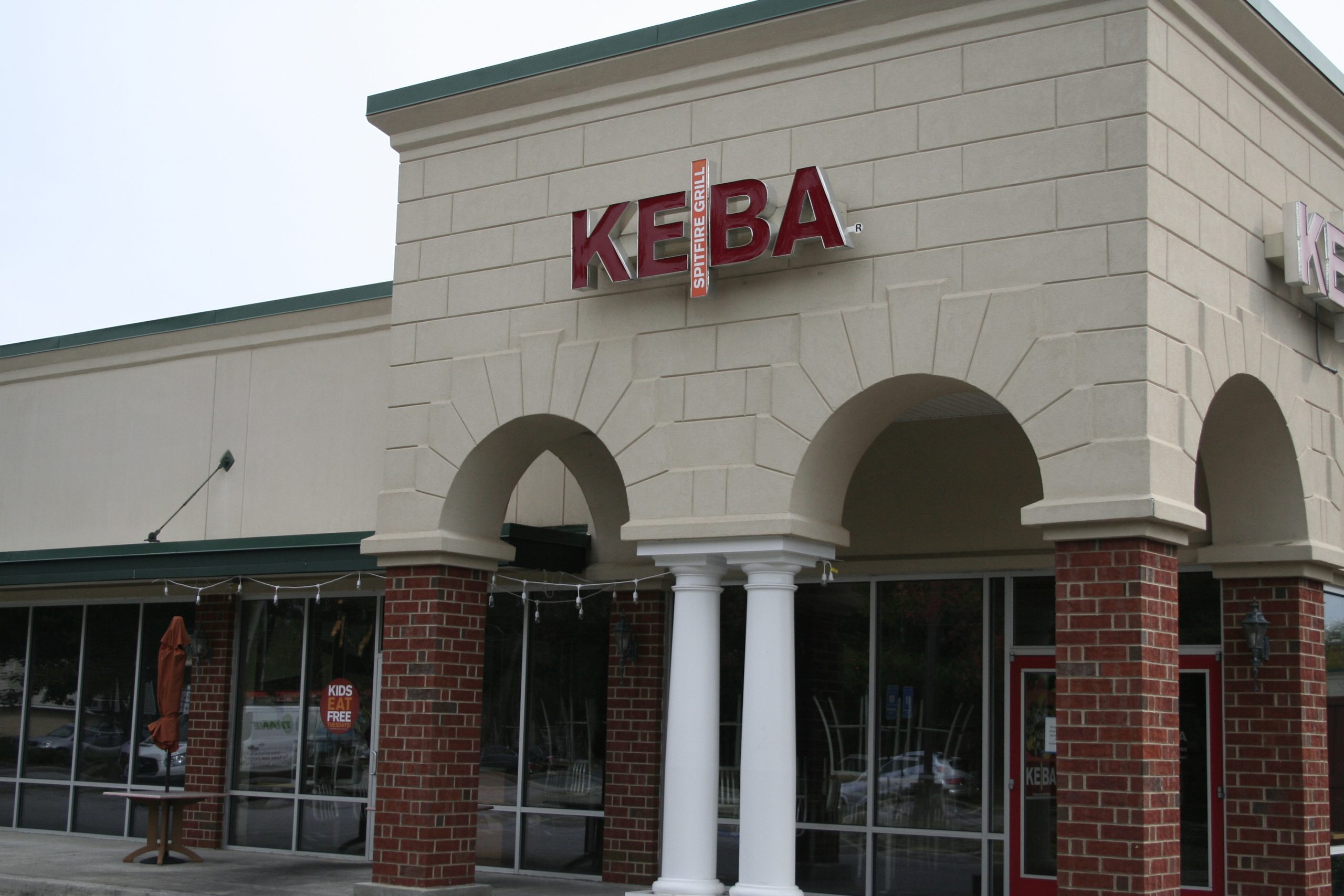 “I think we really needed to bring in more of the current Athens community. We were living in the past,” Whitman said.

Why It’s Newsworthy: With the revolving door of potential customers in Athens, branding is seen as a significant factor of a business’s likelihood of survival.

“A lot of people really miss us, and it kind of makes me sad that that’s the case. I think that a lot of people who were really big fans of KEBA moved away,” Whitman said.

“If you look at a lot of those Facebook profiles, people are living in other states. I think we could have done a better job of trying to recruit the next class of college students to become fans of our restaurant,” said Whitman.

The owners’ goal was to keep KEBA trendy, Whitman said.

“At its height, it was that cool, off-the-beaten-path food that people weren’t used to,” he said.

They just needed to get people through the doors.

The sign taped to the door of the KEBA off of Barnett Shoals Road on Nov. 3, 2019. (Photo/Taylor Morain)

Alexander Pfeuffer, an assistant professor of advertising at UGA, said brands should be what the company wants to be known for.

“Based on what you know about what your target audience is like, what they want, and what they need, you would position your brand in a way that’s relevant to them, and that addresses that,” said Pfeuffer.

Then, a message needs to be created and placed so it will have the most impact, he said. So, in case of KEBA, people needed to try the food once to get hooked.

But, Pfeuffer said advertising isn’t the only aspect to be considered when marketing a product.

“There’s promotional efforts as well that can help in getting your product adopted,” Pfeuffer said.

“The food kind of sells itself; you just need to get people to try it,” Whitman said.

Athens resident Micheal Matlock, who shared KEBA with his friends and family, said it was the food that kept him going back.

But it was marketing that got him there.

Specifically, it was this video advertising Achim’s K-Bob (the initial name of KEBA) that got him there.

“It was definitely the commercial. It was great marketing. It stuck in your head. That song I’d sing in class. I think I annoyed some people,” Matlock said.

KEBA sandwiches was opened by Achim Reus and sold kebap sandwiches along with other European-style foods. Kebap are round flat sandwiches filled with marinated meat, according to KEBA’s webiste.

A franchise is a business model where owners or franchisors who establish the brand’s trademark sell independent franchisees the rights to the trade name, logo and business model, according to the International Franchise Association.

Because people are already aware of the brand, it is easier for franchisees to open new locations.

“Oftentimes, you know the product, you know how it’s received, and you have the whole brand identity already set up for you,” Pfeuffer said.

In July of 2018, Todd DeJasserand, who previously was the owner of the Watkinsville location became the franchisor.

Paul Whitman worked at the Watkinsville location with DeJasserand before becoming a partial owner about two years ago.

Whitman said the Watkinsville location that opened in October 2011 had a slow start.

“The store didn’t have a great start, but they grew. They grew really fast. It was exciting for me to be at the wheel of that. I wasn’t really concerned about the other stores at the time. I was running my own show,” said Whitman.

At KEBA’s peak, there were five locations: two in Athens, one in Watkinsville, one in Bethlehem and one in Atlanta.

While the Watkinsville location was continuing to grow, other locations were struggling.

“The ultimate goal was to put these all over the place, and that never really materialized,” Whitman said.

Whitman said he hopes KEBA will return, and because it is a nationally registered franchise, it is a possibility.

“It might not be the end of KEBA, you know, we’ve had some people reach out to us that are interested in purchasing the brand,” Whitman said.

But he can’t do much more than hope.

“At the moment, we’re really trying to make the best out of a bad situation. It’s never fun to close a restaurant,” Whitman said.

Taylor Morain is a senior majoring in journalism.

Here are pictures from the fire at Oconee Street United Methodist Church:

ATHENS, GA- The jury selection process has begun in the case of William Heaton ...