Pendergrass resident Cody Sorrow was giving a friend a ride home when young people on a golf cart cut him off and nearly caused an accident.

“Out of nowhere, a golf cart full of presumably 12-year-olds darted out in front of me. They swerve all over the road and are very reckless,” Sorrow said.

Sorrow isn’t the only Jackson County driver who has experienced a close call at the hands of a golf cart driver, especially one who is too young to be driving.

After receiving a particularly concerning report of someone drinking and driving a golf cart, Jackson County Sheriff Janis Mangum took to her Facebook page to clarify the laws when it comes to the carts on public roadways.

Why It’s Newsworthy: Golf cart drivers are subject to the same rules of the road as any other motorist, but law enforcement is receiving reports of underage drivers as well as drivers under the influence of alcohol.

“What spurred me to do this last night was the fact that there was a report of somebody drinking and driving a golf cart and almost hitting a car head on,” Mangum said.

The Other Side of the Cart

Nicholson resident and golf cart owner Jason Strickland is no stranger to police response to golf carts on public roads. But he isn’t the one calling the cops.

I’m a victim of harassment from the police department because I’ve been pulled over three times in one week just on my golf cart,” Strickland said.

Strickland said his neighbors called the police on him on multiple occasions for driving his golf cart through neighborhood streets where that is not permitted. But Strickland believes he should be allowed to drive his golf cart on the street like any other vehicle.

“On my golf cart, it has turn signals, it has hazards, it has mirrors, it has brake lights, it has everything I need other than a tag,” Strickland said.

Golf cart drivers like Strickland defend their use of public roadways based on Section 40-6-362 of the The Official Code of Georgia Annotated, which states that low speed vehicles such as golf carts “shall be operated only on any highway where the posted speed limit does not exceed 35 miles per hour.”

What is the Law?

But Mangum said it is not as simple as keeping to roads under 35 miles per hour.

“There has to be a county ordinance giving them permission to drive those golf carts in that neighborhood,” Mangum said.

According to Section 40-6-331 of the The Official Code of Georgia Annotated, motorized vehicles like golf carts are only permitted on public streets or paths if there is a specific ordinance in place that allows them to do so.

This section of the code also clarifies that any local authority that allows the use of these motorized vehicles is also responsible for erecting signs to warn other drivers on the road of the authorization.

Sheriff Mangum said anyone operating their golf cart under the influence of alcohol would be charged with a DUI like any other driver on the road.

The town of Braselton is one area of Jackson County that does have an official golf cart ordinance in place.

The ordinance has clear rules and regulations and permits drivers from age 12 to 15 as long as they have a parent or guardian in the front seat. 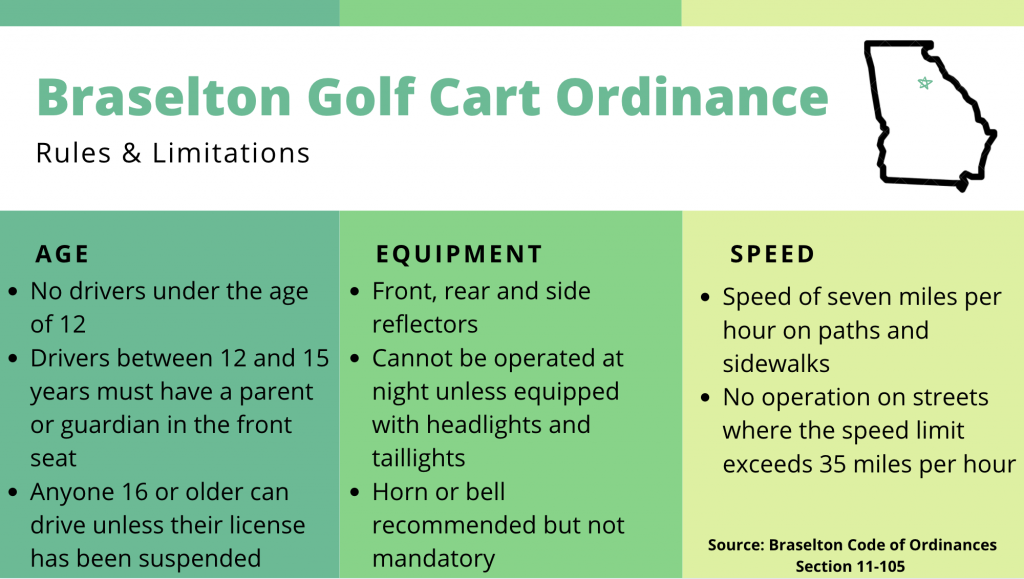 One thing that Mangum and golf cart drivers can agree on: this is not how law enforcement wants to be spending their time.

“We have a lot of things to do here, and that is not what I want to focus on. However, when we get complaints from citizens of this reckless behavior, then yes, we’re going to do something about it,” Mangum said.

Cassidy Hannon is a senior majoring in journalism in the Grady College of Journalism and Mass Communication at the University of Georgia. 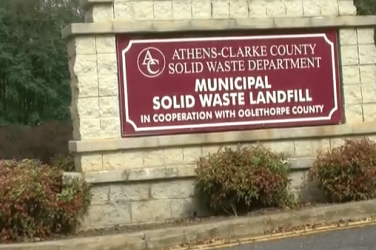 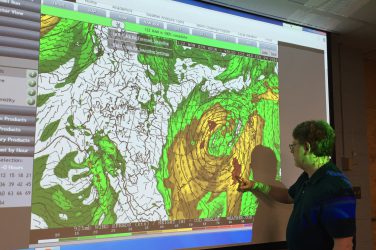 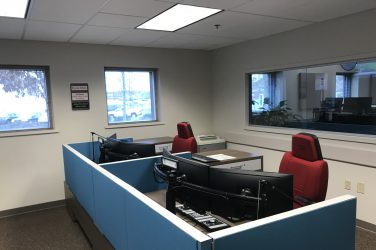 Strict procedure and technological innovation has allowed 9-1-1 centers, like those in Athens-Clarke-County, to ...