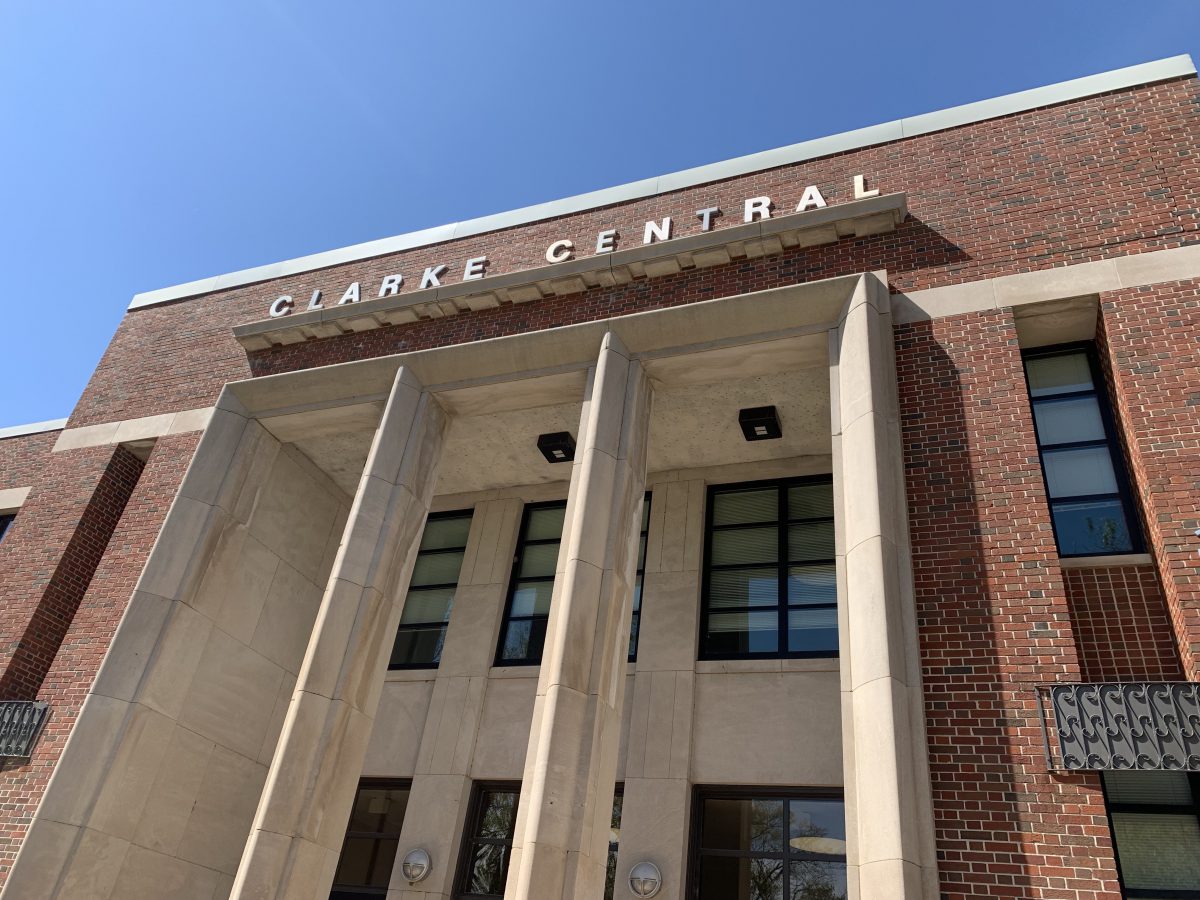 But on this particular morning, a lingering photo assignment deadline forced Jones to forgo his weekly ritual of Friday breakfast at Chick-fil-A with friends and arrive at school much earlier than usual.

Aside from skipping breakfast, it was a painstakingly normal Friday.

When he got to school, Jones turned in his assignment and made his way to the large common area in the middle of the school. There, while talking with two friends, he began hearing several loud popping sounds resembling fireworks.

“It was the last day for seniors, and there was usually a lot of senior pranks. So, my thought was firecrackers,” Jones said.

He didn’t make anything of it until he heard the sounds again.

It was then that Jones turned around and saw the cause of the ruckus. T.J. Solomon, a classmate in his first-period Spanish class, wielding a rifle, with tears running down his face.

“He was crying. I remember that pretty specifically,” Jones said.

His first thought was that Solomon was in a fight with someone and things had escalated out of control. Columbine had happened exactly one month prior to that day, and when Solomon turned and fired directly at Jones and his friends, he began to understand what was happening.

“And so that was when like, you know, Columbine and everything that just happened flashes through your head. So everyone started running,” he said.

Jones and a group of 10 other students immediately ran out of the building and fled to a neighborhood across the street.

“We’re all screaming and freaking out. I remember a few people started going door to door in the neighborhoods, banging on doors, trying to find some help,” Jones said.

Jones described his next decision as “not smart.” He made his way back into the school to make sure his girlfriend at the time was safe. She was in one of the bathrooms before the shooting began, and he thought she may not have heard the shots. Crossing the street from the nearby neighborhood back toward the school, Jones saw bodies laid out on the bus lane. He recalled seeing a large amount of blood on the pavement.

The hallways were empty when he reentered the school. A deafening silence filled the air, interrupted only by the jolting gunshots from the still-active shooter, then out of sight from Jones. He began to sprint away from the gunfire.

“I ran down a hallway, and I probably made it 10 feet, and a door to a classroom swung open and a classmate of mine clotheslined me into the room,” Jones said. Flat on his back, he was trembling so hard that his wristwatch rattled against the tile floor. After about a half an hour, a voice came over the intercom telling students to convene at the football field.

The immediate danger was over.

A New Era of Concern

Jacob Jones, now 35 years old, lives in Tennessee with his wife and two young children. He recalls his experience during the 1998 shooting at Heritage High School in Conyers, Georgia with unexpected tranquility. He was one of the many lucky ones who emerged physically unscathed from the shooting, which left six students injured.

This year marks the 20th anniversary of both the Heritage High School shooting and the Columbine High School massacre.

Watching the horror of these events unfold on cable news ushered in a new era of concern over school safety in the United States over the last two decades. This concern has only grown since the highly publicized incidents following Columbine such as the Sandy Hook and Parkland shootings.

While Jones says his experience with school violence hasn’t affected him every day, he can’t help but show concern when thinking about the safety of his own children.

He remembers having these concerns when he dropped his 5-year-old son off at his pre-K this year.

“He went from like a daycare like a little tiny thing to an actual school system school that’s made of cinder blocks. I do remember talking to my wife on the way out being like, ‘Addison, is it really bad that I was just thinking about escape routes while I was in there?’” said Jones.

Despite school shootings still being relatively rare occurrences, Jones is one of more than 187,000 students who have experienced a shooting during school hours since Columbine, according to a Washington Post report published last year.

Reactions to these events from lawmakers, pundits and citizens are typically ample and energetic, ranging from calls to ban assault rifles to giving teachers guns. But when time passes and something new grabs the nation’s attention after a school shooting, the noise dies down, and the less sensational forms of school violence like fighting, bullying and suicide continue out of sight and mind.

Regrettably, school safety is a cyclical conversation in the United States, one that only seems to resurface with national interest in the wake of tragic acts of violence.

However, here in Georgia, the topic of school safety has made headway under the Gold Dome in Atlanta. A massive $69 million-dollar school safety initiative presented by Gov. Brian Kemp in January aims to give each public school in the state a $30,000 school security grant. Kemp also wants to put an additional mental health counselor in each of Georgia’s public high school and plans on allocating $8.4 million to the Georgia Apex Program, which expands mental health resource access to students across the state.

Addressing both security and mental health resources may give Kemp’s plan a comprehensiveness that’s seemingly absent in the national conversation surrounding the issue.

But will it be as effective in combating school violence as it hopes to be?

What are the Safety Needs of Schools?

A quick look at the security budget for the Clarke County schools shows that the biggest expenditure for the district is personnel.

Where then might a security grant from the state be best spent? According to security officials, there are a several different avenues that make sense to take in Clarke County School District.

“You can always upgrade the camera systems. There’s security related equipment we could put in place from fencing to even police vehicles if that were permissible under the grant,” CCSD Police Chief Mark Sizemore said.

Chief Sizemore reiterated that these are merely suggestions, and that any such decisions made about a security grant would be done so with extensive input from his whole team.

Police and security officers are indeed the first line of defense for schools in the event of imminent safety threats, yet the fight against school violence doesn’t just fall on those who wear the badge.

School counselors are another group of trained professionals who work in tandem with police officers to keep students safe.

Their role is critical, albeit less talked about than the role of weapons access or security personnel, because in any instance of school violence, there’s always the question of mental health.

“Every time we’ve seen a school shooting occur, it’s one of the first things that we look it. ‘What were the different mental health challenges that the shooter was dealing with?’” CCSD Director of School Counseling Tessa Barbazon said.

According to Barbazon, a former school counselor, different levels of trauma or even just life circumstances can play a significant role in all forms of school violence, not just shootings.

“Even with less violent issues such as outbursts or fights, oftentimes the students are dealing with something more.”

As the principal authority on school counseling in CCSD, Barbazon sees both positives and potential negatives in the logistics of Gov. Kemp’s focus on the Apex Program.

“Pros include ease of access to services, and the addition of services and the prioritization of funding helps tackle the stigmas around mental health. Cons include the logistics of increasing services and the creation of a need for more practicing mental health professionals—will we have enough practitioners to fulfill the increase of services? If not, how will this increase of Apex funding have a positive impact,” Barbazon said.

Perhaps what should be taken into account when determining the best ways to improve school safety is the alarmingly low student-to-counselor ratio in most states across the country. A recent ACLU report highlights this disparity and the problems that ensue as a result. Among other things, the report notes that increasing police presence in schools hasn’t increased school safety, and that marginalized students tend to be disciplined at higher rates in schools with more police than counseling staff.

A police officer may be able to stop a shooter in the act, but who can at-risk students go to in the days, weeks, or months leading up to a potential breakdown?

Lakeisha Gantt, a current CCSD Board of Education member, remembers the rewarding feeling of being available to struggling students in need of someone to talk to during her time working as behavioral specialist for the district.

“In a high school, there are hundreds and hundreds of students to one counselor, right? And so, or maybe they weren’t at a place where they can share it with their teacher, their counselor, or a security officer,” Gantt said.

School violence in its most horrific forms prompts a dialogue wherein much is said but solutions don’t often arise in time before the next event happens. It’s this complexity and convolution of discourse that makes finding answers to the problem so difficult.

What we’re left with is a bit of a quagmire. Even as Georgia pushes the issue at the state level, there’s hardly a foolproof way to ensure that no one else has to live similar experiences of Jacob Jones and the scores of others who’ve encountered some form of school violence.

That said, taking a hard look at the bigger picture of school safety may be the best course of action.

“It is important that we understand that our schools are microcosms of our society, and in part of that work, whether we’re adding more counselors, whether we are, you know, beefing up our security, whether we are working with principals, all of that has to be done with the understanding of how culture plays a role in our environment,” Gantt said.

Athens Farmers and Business Owners Count the Costs of Working Together

Why So Many Ads ?

Athens, GA-Sometimes it feels like it’s almost all you see when your turn on ...

Open Letter from the UGA President

We are re-publishing a letter from University of Georgia President Jere Morehead to the ...